Michael Jackson’s London concert at the O2 arena will still occur. Yes, you read that right — Michael Jackson is not finished with performing. 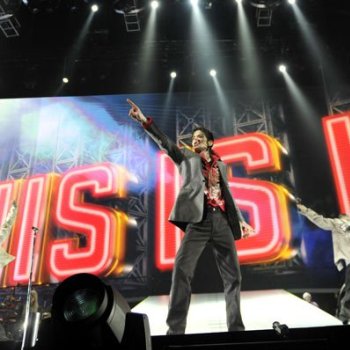 Jackson was in the final preparations for a 50-date performance run at the O2 arena when he passed away June 25.

The King of Pop was about to launch the comeback he dreamed of, so said AEG promoter Randy Philips. As he repeated at the Michael Jackson memorial, Philips believed one of the hugest losses in
Michael Jackson’s death is that the world never saw
the This is It show.

“The world needs to see this production. It would have been – which is the tragedy here – one of the most amazing shows ever, so at some point we want the world to see that — the sooner the
better,” Philips said.

Instead of a 50-night performance Jackson, his amazing band and troupe of dancers will hit the O2 arena stage on August 29 – the day
that would have been Michael’s 51st birthday.

Remember the CNN hologram of Will.I.Am talking with Wolf Blitzer on election night?

That same technology will put Michael Jackson on stage in a hologram taken from videos of the late singer’s rehearsals for the
This is It tour.

The back-up dancers and singers will be joined by Shaheen Jafargholi throughout the performance as he tackles Jackson’s earlier work in the Jackson 5 with the full spectacle behind him that
would have backed Michael Jackson’s final live shows. Jafargholi performed Who’s Lovin’ You at the July 7 Michael Jackson memorial.

Check it the entire video of the Staples Center event here!

Philips added that This is It would have been an “amazing show” and Jackson would have wanted the London fans to witness the event, even with him reporting for duty as a hologram.