Michael Jackson dies after suffering a heart attack in his California home. Jackson’s death is a shock as he was only 50. 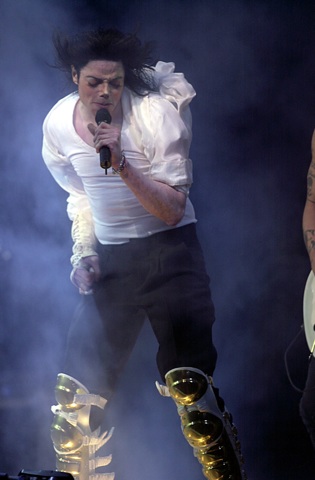 Jackson was not
breathing when emergency crews were called to his LA home around noon on Thursday, June 25. Los Angeles Fire Department Steve Ruda told the Los Angeles Times that paramedics performed CPR on
Jackson while transporting him to UCLA Medical Center.

It is reported that paramedics never regained a pulse. Michael Jackson died before he arrived at the medical center. Members of the Jackson
family were seen gathering at the hospital throughout the day.

The life of Michael Jackson was one of rags to riches, but also one of a sad, isolated man who faced continuing controversy over personal
and professional actions.

Rising to childhood fame as the front man of the Jackson 5, Michael and his brothers carried the family out of working class Gary, Indiana and onto the international stage. Jackson spoke openly
about his childhood abuse at the hands of his father, Joe Jackson, in an interview with Oprah Winfrey in 1993 and how his meteoric rise to stardom negated any chance of having a childhood,
resulting in his fascination with all things child-like.

Michael Jackson: to the top

Jackson continued his rapid career trajectory with his first solo album Off the Wall, which produced four top ten hits and three American Music Awards. But it was his second solo album,
Thriller, which firmly entrenched Jackson as the King of Pop.

But despite his wild success, Jackson was dogged by rumors and allegations of strange and sometimes criminal behavior offstage. Jackson was accused of lightening his skin to look less ethnic;
doctors confirmed the singer actually suffered from vitiglio and lupus, the treatment for which causes changes in skin pigmentation and sensitivity to sunlight.

Michael Jackson also had repeated and obvious facial plastic surgeries, including (according to medical professionals) at least four nose
jobs, a forehead lift, thinned lips, cheekbone implants and a cleft put into his chin. Many believe Jackson suffered from body dysmorphic disorder, possibly caused by his abusive childhood and
early fame.

Other rumors about Michael Jackson included him sleeping in a hyperbolic chamber to prevent aging, keeping a pet chimpanzee and purchasing the bones of the Elephant Man. Jackson disputed all but
the chimp claim in his 1993 Oprah interview.

Michael Jackson’s public image took a turn for the worse when he was accused of sexual abuse by a 13-year-old boy who was a regular
guest in Jackson’s home, along with his family. Jackson strongly proclaimed his innocence, yet made a financial settlement to the victim’s family of $22 million, after which the alleged
victim refused to cooperate with the police investigation. Jackson was never formally charged, but the damage was done to his public persona. An image that would remain until Michael Jackson died.

Several years later, Jackson was brought up on charges of child sexual abuse and administering an intoxicating agent after
a documentary titled Living with Michael Jackson showed him holding hands and discussing sleeping arrangements with a 14-year-old boy. Jackson again denied the allegations and was acquitted on all
counts in 2005.

ON THE NEXT PAGE: About ex-wife Lisa Marie Presley, the Jackson family and Michael Jackson’s legacy