High school senior Beth Cooper won’t save the world, but she is a cheerleader just like Hayden Panettiere’s Heroes character. On July 10, audiences can catch Hayden in the fun, heartfelt comedy I Love You Beth Cooper, based upon a whimsical book by Larry Doyle. 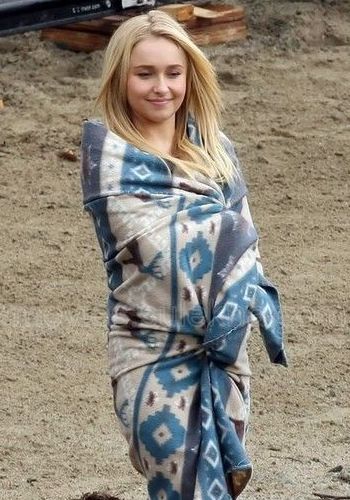 In I
Love You, Beth Cooper, the class nerd Denis Cooverman (Paul Rust) confesses all in his graduation speech. At the top of his list is his love and desire for ultra-popular queen bee Beth
Cooper (Panettiere). For her own reasons, she shows up at his door promising to show him the time of his life!

In 2008, SheKnows trekked up to rainy Vancouver to visit the set of this Chris Columbus-directed comedy. The beautiful North Shore Studios are surrounded by pines but we found Hayden carrying an
umbrella, wearing a prom dress and “surrounded” by a warm and cozy down coat and Ugg boots against the cold rain.

After watching a couple of scenes shoot on the soundstage set of the Cooverman house, we were tucked into a production office, slugging down hot chocolate and ready to chat about Hayden’s very
personal high school and middle school experiences (she swears she wasn’t popular and even felt “tortured”!).

SheKnows: That’s a really pretty dress. So why are you dressed the way you are today? Can you explain the context?

Hayden Panettiere: (laughs) I want to burn this dress now. I used to like it. Yeah, when you’ve been wearing the same outfit for 3 months….

SheKnows: Oh right. Of course. The action all takes place over one night.

Hayden Panettiere: Yeah. My friends actually made fun of me. They were like…’in the beginning you were like’, ‘look at my dress. Isn’t it so pretty?’ And now I’m like
‘I want to burn it. I hate it’. But this is my graduation dress, so this is for the party. For the partee, which we spend the entire night attempting to get to and all hell breaks loose.

SheKnows: How’s the experience been for you playing comedy? Does your character have a lot of funny lines or are you more of a straight man? 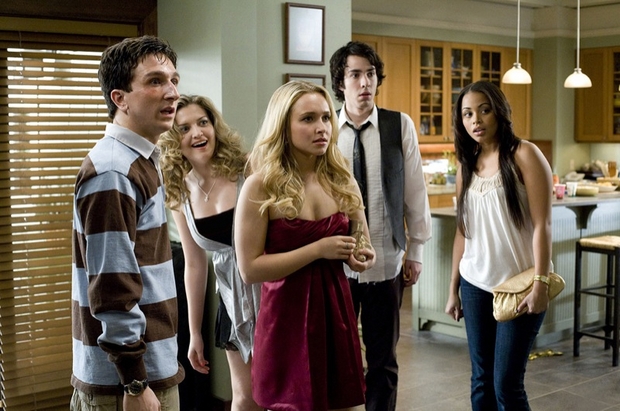 Hayden Panettiere: I’m kind of the straight man in with the comedians, but, at the same time, there’s a lot of funny stuff that goes on. I think it’s kind of
in-between. It’s been really great. I think comedy is one of the hardest, if not the hardest, form of acting and it always mind-boggles me to see the Academy Awards and the fact that comedies
are never nominated or actors. I’d like to say (to a dramatic actor) ‘yeah, you can cry and you can play mental, but I’d like to see you do comedy’.

Hayden Panettiere: (laughs) You know what? I just find myself playing them for some reason and sometimes they’re not even characters that are like
‘cheerleaderesque’. They’re just cheerleaders.

SheKnows: What was it about this story that made you say ‘I want to put on that costume again’?

Hayden Panettiere: Well, they got me in the outfit and they took a still picture and that’s pretty much the amount I’m in the cheerleading outfit. It’s in one
picture. But I really wanted to do a comedy especially coming from a show like Heroes. It’s just nice to spread your wings a
little bit and in this business. You get categorized quite a bit and you are your last film all the time, so if you stick to just comedies or just dramas, it’s very hard for people to see you in
any other light. So coming from a drama in ‘Heroes’, it was way up on my priority list to do a comedy. And this one has heart, which it’s nice.

SheKnows: So can you describe what the film is like? What sort of movie does it remind you of?

Hayden Panettiere: The concept of the story is kind of like Superbad just because it takes place all in one night. And it’s kind of like Mean Girls because I look at
Mean Girls and I see something that people kind of assumed would be a teen flick and was so much more than that. And it was such a great film. Basically the story is Denis Cooverman is the
valedictorian of the school and makes his speech at graduation and he says ‘let us say the things that we never had the chance to say’ and he says, ‘I love you, Beth Cooper’. And this is a girl
that’s the queen bee of the school and he thinks of her basically like a picture. She’s perfect. She’s wonderful and beautiful and confident and sexy and he sat behind her in
almost every class and she has no idea who he is.

SheKnows: This is so real. I think everybody either was like that or knows someone like that.

Hayden Panettiere: Yeah. Then throughout the entire film, even though it’s hilarious, it really has heart because these five students get stuck together through a series of
events and they find out that even though they came from completely different social backgrounds in high school that they really have a lot in common. They really, really enjoy each other and they
learn a lot from each other and he learns that this girl is not perfect. She actually thinks that she’s nothing. She thinks that she’s done so well in high school because she knew how
to control people but that was the high point in her life because she’s not good at anything. She’s not smart. She’s not really good at cheerleading. She’s not an athlete or
has any ambition in life. 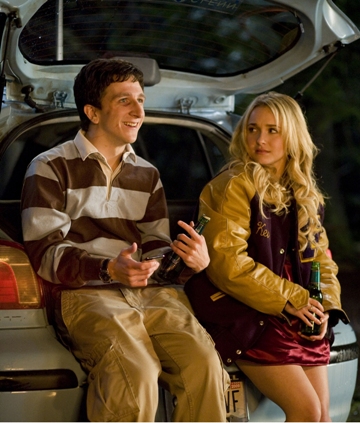 SheKnows: So, could she fall for sweet, nerdy Denis then?

Hayden Panettiere: Well, she winds up looking at him and going, ‘you’re incredible. You have a life and you’re going to go off and you’re going to cure cancer and
you’re going to be a doctor and you’re smart and you have so much more than me. Even though high school wasn’t good for you, it was wonderful for me, but your life is going to be
great for you’. So it really is a sweet story as much as it’s a comedy.

SheKnows: Cool. Were you able to have a regular high school experience yourself?

Hayden Panettiere: I made a lot of sacrifices which is great for me now. I worked really hard but, for being gone as much as I was, I actually had a relatively normal high school
life. I home schooled because, my Freshman year I went over to South Africa and did a film there (Stripes) and lived there for about six months so I finished my Freshman year there. You
never know if and when you’re going to work again so I just decided to continue to do high school in a home schooling program but I did it at home where I was raised and with all of my
friends so I was still going to high school. I was even in the yearbook. I went to homecoming. I went to prom. I participated in school sports. I just didn’t go to class with them. Really, as
much as it was abnormal, it was normal.

SheKnows: Where was this?

Hayden Panettiere: It was in New York, a small town, a great place to grow up because it’s so boring. You could not get yourself in trouble. You resort to house parties. We
had this fort in the woods near a cliff and it was beautiful, amazing. You would never get that anywhere else. It’s one of those places where, while you’re there you’re going
‘can’t wait to get out of here’ but as soon as you’re gone you’re like ‘ah, I miss it’. Such fond memories of it.

SheKnows: Can you relate to cliques in school though?

Hayden Panettiere: I was never the popular girl. I actually thought the worst, worst, worst was middle school, because in high school you could walk away for lunch, do this, do
that. You were much more open. You had a much broader group of friends and in middle school it was all about where you sat in the lunchroom. And it was one of the most traumatizing experiences for
me. I was absolutely tortured.

SheKnows: Wow, can you tell us any particular incident that teens can relate to?

Hayden Panettiere: I remember going to sit with the popular kids for the first time because one girl like invited me over. I was like, ‘oh my gosh’ and went to sit and one of the
guys pulled the chair out from underneath me before I sat down and everyone started laughing. So, I was never the popular girl. Never, never, never.

SheKnows: That’s so awful. I wonder what those girls get out of doing that?

Hayden Panettiere: It’s like Mean Girls. You knew that she had to put effort into being bitchy so that nobody else crosses her line and thinks that they can take
over her spot. It’s like the more you ignored people, the more they wanted to be friends with you and it was all so fake and phony. And everyone I see like that you just go, ‘they’ve
got to have some sort of problem. They’ve got to be damaged in some way. They have a big problem with themselves’.

SheKnows: Is that how Beth, your character is?

Hayden Panettiere: What you wind up finding out about her is that she’s actually a genuinely a nice person but this is all she has and she needs to shine. This is her moment
to shine in high school because she feels the rest of her life is going to be completely ordinary. You know, she even makes a comment about the fact that she’s going to get fat and ‘you
should see my mom’. It’s very funny but it’s very endearing and sweet and it’s very human.

SheKnows: Tell us about working with director Chris Columbus. He has a rep for successfully working with young actors.

Hayden Panettiere: He’s wonderful. I think he’s one of my favorite directors. I’ve never seen him get upset about anything which makes me feel bad because then,
if I get upset, then I’m going to feel like an ass. He’s great. He’s really open. I think one of the best things about working with a director like him is that he realizes when an
actor is hired, they’re hired because they bring something to the table. They bring an opinion and he’ll go ‘Oh yeah, I never thought of that. That’s really good.’ It’s just much
more of a creative environment and he just laughs all the time. He’s very collaborative.

Up next…Hayden on having to look “perfect” and her passion for whales.