A Malawi court has awarded Madonna the right to adopt Mercy, an African orphan, two months after turning down her initial bid. 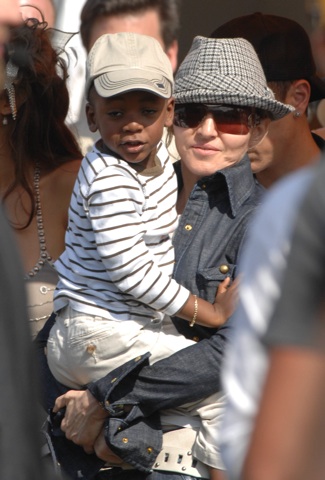 “I am extremely grateful for the Supreme Court’s ruling on my application to adopt Mercy James. I am ecstatic… My family and I look forward to sharing our lives with her,” Madonna says in a statement released by her rep.

Madonna’s Malawi lawyer, Alan Chinula, says the singer stayed up all night awaiting the news. “It’s the early hours in New York now, but my client has been awake all night waiting for this,” he says. “She was ecstatic when I broke the news to her. She said, ‘Thank heavens.'”

“[I am] now awaiting instructions from New York to start preparing travel arrangements for Mercy,” says Chinula. “I have to be there for her passports and everything.”

It is expected to take three to five days to prepare the paperwork, and then a private jet will whisk Mercy to her new digs in New York. Madonna will not be making the trip to Africa to meet her. Can’t interfere with her yoga and workout schedule…

The singer’s initial request to adopt the little girl in April was denied due to residency laws. Under appeal, Madonna bought some new laws, and presto! Baby.