The MTV Movie Awards rolled out the red carpet in Hollywood and SheKnows was in the house. 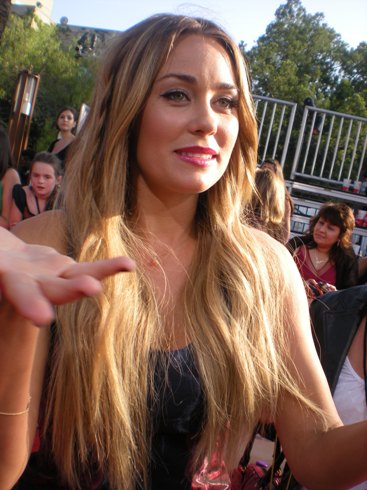 The first to drop by SheKnows was The Hills star and soon to be former cast member, Lauren Conrad. Yes, folks, The Hills are alive on SheKnows. The Hills season finale had not even aired yet on the west coast and Conrad was dishing!

“The shows are always fun,” Conrad says when asked if the show is ever laborious. “You get to dress up and come out and see everyone. I don’t even know who’s coming, but I’m excited to see my friends. I haven’t seen them because I’ve been filming.”

Conrad was, of course, at the MTV Movie Awards because of The Hills finale set to join the throngs of celebrities who have become MTV veterans. She is not sure if she will watch the upcoming Kristen Cavaleri joining of The Hills, but she will keep an eye on her friend Whitney Port.

We wondered: since Conrad has such impeccable taste and access to anything, who amongst her friends is the most difficult to get presents?

“Because Whitney has everything and she has such cool taste. Everything you buy, it’s like, ‘Is this cool enough for her?'”Thanks, Lauren, watch out for Eminem!

We did not know at the time, although should have from his entrance, that the person to watch out for on the red carpet and inside the Gibson Amphitheater was Sasha Baron Cohen as Bruno. 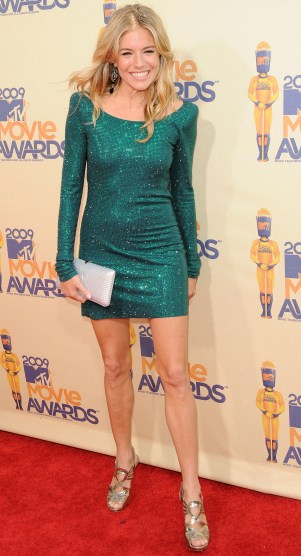 JC Chasez walked by as his America’s Best Dance Crew returns with new episodes later this summer. Who’s he excited to see with all these big-time movie stars walking the carpet including Will Ferrell, Sandra Bullock, Cameron Diaz and Denzel Washington?

“The Kings of Leon,” Chasez says and smiles as he heads in the theater.

Michael Welch, otherwise known as Mike Newton of Twilight, shined a little light on the phenomenon and what to expect from the New Moon sequel. “It went great,” Welch admits.

His insight into the exit of Twilight director Catherine Hardwicke is telling. “It was fantastic. We have a new director, Chris Weitz. (He) was amazing. It’s interesting because between him and Catherine, they’re so different. Catherine is somebody who can only function at a cluttered desk. She needs chaos to success. That’s wonderful. Chris is the exact opposite. Just couldn’t be more cool, clam and collected and had his stuff together. It’s the people at the top that affect everyone below them — so the energy was more calm.”

As for his Twilight hopes for tonight’s Movie Awards? “We’re nominated for seven. I’m greedy. I’d like to see at least five,” Welch says. “But I’ll take all seven.”

Twilight, as so many of its stars mentioned at tonight’s awards, is all due to the brilliance of Stephenie Meyer. Welch believes it commences and ends with her tale. “It’s a classic story of eternal teenage love. I think that’s why it was so successful, and vampires, in general, seem to be very popular,” Welch says.

Peter Facinelli: a kiss to remember

Our Deanna Barnert, working the red carpet, shares this special moment of which many a Twilight and Peter Facinelli fan will be jealous.

First, Deanna asks how New Moon is different. “The directors are completely different,” Facinelli echoes Welch’s sentiment. “Catherine (Hardwicke) is a ball of energy and infuses passions when she comes on the set. Chris is more laid back, insightful and thought provoking. It’s completely different. It’s like two different rollercoaster rides, but you still love the rides. They’re fantastic.”

Also different was the filming location. “I loved Oregon. But I miss Vancouver,” he admits.

Does Facinelli have any advice for Rob and Taylor as New Moon’s arrival sends Twilight pandamoniam into a new stratosphere?

“Quit while you’re ahead,” he says and laughs. “No, I think they’re handling it beautifully. I feel fortunate to have been working for the last 15 years and I love working with good actors, and Rob (Pattinson) and Kristen (Stewart) are fantastic.”

So, who are you looking forward to seeing tonight? “You!” he says. 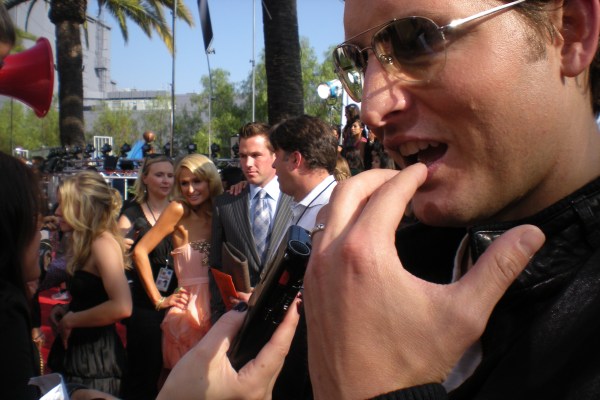 Then, he grabs Deanna’s face and plants a kiss on her cheek.

You think the Twilight crew loves SheKnows? I’d say so!

Another Twilight star swings by 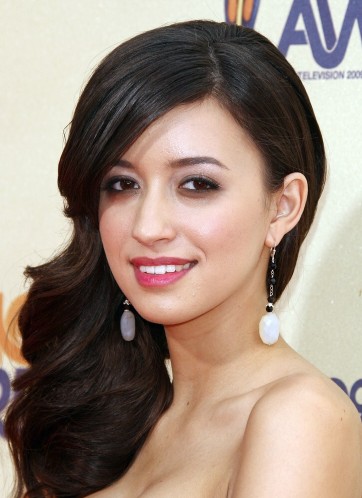 Christian Serratos is Twilight’s Angela Weber and could not be more thrilled with tonight’s scene. “It’s really exciting. I found out Twilight was nominated for a significantly large amount of things, so it’s cool to be here to witness it all,” Serratos says.

The frenzy has actually caught this Twilight actress by surprise. “I didn’t even know what Twilight was,” she says and laughs. “I was like, ‘vampire movie, that’s sick.’ I was living in Minden, Nevada at the time, so I was contemplating whether I wanted to fly all the way down to LA. I did and I got sucked up into all this, so I’m pretty excited I left!”

In honor of He’s Just Not That Into You’s Tuesday DVD release, we had to ask: has Serratos any bad date tales?

“My God. I always feel uncomfortable on dates. I try to avoid them as much as possible. I usually bring friends along. ‘Oh, you want to hang out? Okay, my friends going to come along,'” she says and laughs.

Then the red carpet scene switched noticeably from the gothic world of Meyer’s Twilight to the song and dance.

What did Coleman do to get red carpet ready?

“I actually took a long nap, just so I didn’t let it get to me, and I had my hair and makeup team come over and we put me together. I’m just honored and excited to be here. It doesn’t take much effort to show up if you just come as yourself,” Coleman says. 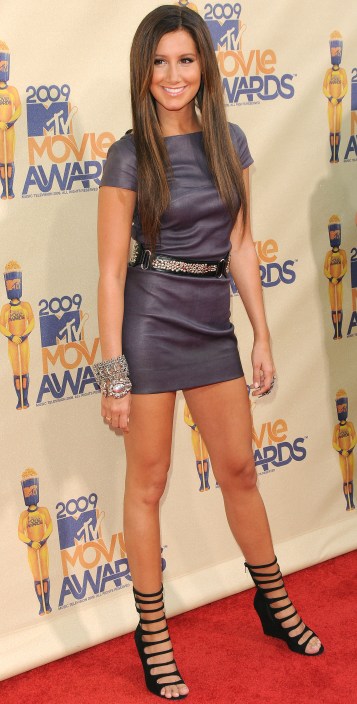 Ashley Tisdale, eventual upset winner herself for Breakthrough Female Performance beating her co-star Vanessa Hudgens. Being an MTV event, Tisdale was too eager to talk tunes.

“I’m really excited about it — July 28,” Tisdale says of her upcoming CD. “It’s got some pop and rock. It’s all about my experiences — so it’s very personal. My favorite song has to be What if? and Masculate,” Tisdale adds.

Who’s she excited to see at the MTV Movie Awards?

“Eminem,” she says without a hesitation.

“Footloose is coming up, with Chase Crawford,” Ortega says with utter delight. Was it difficult to loose his first choice, Zac Efron to take Kevin Bacon’s iconic dancing shoes?

“Zac decided he didn’t want to do another musical, which I totally get. Zac Efron, huge star. We’re excited for him. He had a great opening with 17 Again and a major career ahead,” Ortega says. The director is thrilled with Efron’s back-up.

“Chase has stepped in. We’re going to do Footloose with him. We’re looking for our girl now — seeing a lot of beautiful actresses — every lady in Hollywood between 16 and 33.”

Word on the street the actress that will be cast is Julianne Hough. But, Ortega will only keep to plot points and will not dish!

“There’s a lot of Footloose that’s going to remain there, in terms of story telling and themes, but we’re going to bring a lot of new energy to it – music, choreography and cinematography. It’s contemporary,” Ortega says. “Funny how some things change, and some things don’t (like the) big sound track. We’re going to working with Interscope and creating awesome balance between some of the old songs and some new material.”

Deanna Barnert contributed to this report including photos of Lauren Conrad and Peter Facinelli.