Scottish singing sensation Susan Boyle is starting to crack under the pressure of her newfound Britain’s Got Talent fame. 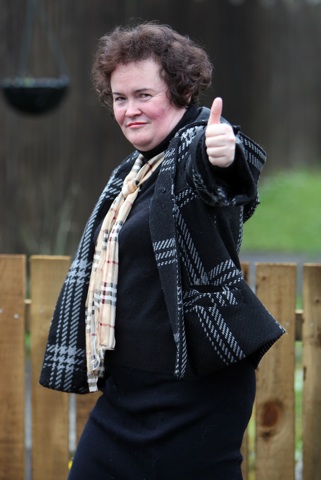 The Britain’s Got Talent singing sensation wowed the world when she — a 48-year-old gray-haired, dowdy spinster — stepped out on stage and belted out a very difficult song from Les Miserables. Since that night, she has been followed everywhere by fans and press hoping to get a sweet sound bite from the jolly lass.

But two reporters may have taken things too far. Boyle was seen outside the Wembley Plaza Hotel in a foul-mouthed exchange with two strangers and quickly followed up with two police officers.According to a show spokesperson, “Two journalists were harassing her and pushed her [Boyle] over the edge. She was left slightly distressed, and the journalists were removed from the building by police.”

Boyle later became incensed while watching another semi-finalist performance in the hotel bar. Witnesses say she began dropping f-bombs when she heard judge Piers Morgan tell 12-year-old contestant Shaheen Jafargholi his had been “the best singing performance we have heard in the semi-finals so far.”

Boyle reportedly flipped off the television and stomped to her room.Morgan has taken to the airways to defend Boyle. “I’m actually feeling more supportive today than I was before because I feel really sorry for Susan. From what I hear, she’s been in tears the last two days. She even threatened to leave the show yesterday at one stage because of the sheer amount of pressure on her,” he tells Maggie Rodriquez of The Early Show. “And you have to remember with Susan, she’s a 48-year-old lady from a tiny village in Scotland who has never been exposed to anything like this kind of attention. And I think she’s really feeling the heat.””And you know, the hotel she’s in is crawling with tourists, crawling with the media. I think she, you know, maybe she overreacted. I don’t know what happened. She denies, apparently, some of the things that have been reported… I think in the end, though, that Susan is quite naturally feeling the pressure herself,” Morgan says. “It doesn’t really matter what people say to her. She knows that on her semifinal performance, when she sang, she cracked at the start and nearly blew it. And now she knows that she’s got this amazing career ahead of her, if she can nail that song on Saturday. And it’s going to be a fantastically exciting moment because this is it. These are the two minutes that will define Susan Boyle’s life.”Boyle competes for the top prize on Britain’s Got Talent this Sunday.