LeAnn Rimes continues to feed the rumor mill with inklings of the demise of her marriage after putting her Nashville house up for sale and being spotted with rumored fling Eddie Cibrian. 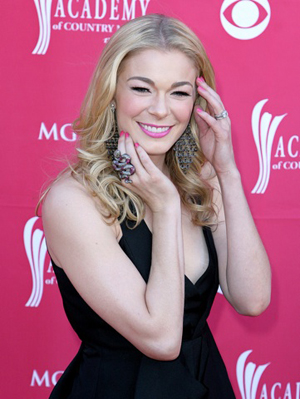 “LeAnn and Dean’s home is on the market,” says a rep for Rimes. The $7.45 million property features six bedrooms, seven and a half baths, and both exercise and media rooms.

“LeAnn and Dean decided to put their home on the market because she’s been spending more time in LA (where the couple also have a home) and New York,” said a friend. “She’s been receiving more offers in the film, TV and theater worlds, so they want to have a footprint in all three cities.”

But the Nashville home was just completed in 2008. Seems a bit suspicious after months of speculation that Rimes is cheating with actor Eddie Cibrian.

Adding fuel to the fire is the fact that Rimes was spotted at a Lakers game together. The pair, who recently costarred in a Lifetime movie and were caught nuzzling and holding hands around LA, say it was a complete coincidence that they ran into each other outside of the Staples Center — but quick-thinking bystanders snapped pics of the pair sharing drinks at a local bar during halftime.

A friend of Rimes says she and her husband, Dean Sheremet, are still having problems (duh). “(LeAnn and Dean) are still having challenges and trying to work through them. They’re working on their marriage.”

But Cibrian, who most likely had a huge pile of crap to dig himself out of while explaining all this to his wife the first time, probably woke up to the smell of his clothes burning in the front yard this morning.