Actress Farrah Fawcett has died after a five-year battle with cancer. She was 62. 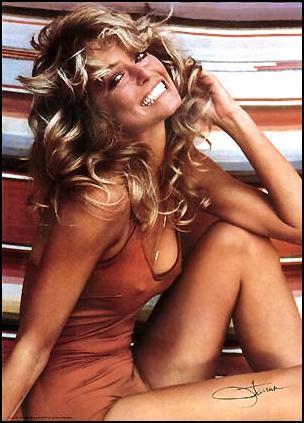 A pop culture icon since the release of her world-famous
swimsuit poster, Fawcett rose to fame as Jill Munroe in the ’70s television hit Charlie’s Angels. She earned the first of her three Emmy nominations for her portrayal of a
battered wife pushed too far in The Burning Bed.

In 1986, Fawcett received a Golden Globe nomination for Extremities, in which she played a rape victim who turns the tables on her attacker. Critical acclaim and award nominations followed
for her roles in Nazi Hunter: The Beate Klarsfeld Story, Poor Little Rich Girl: The Barbara Hutton Story, Margaret Bourke-White and Small Sacrifices.

Fawcett was married to The Six Million Dollar Man Lee Majors from 1973 to 1982, separating in 1979. She enjoyed a longtime relationship with fellow actor Ryan O’Neal, with whom she
had a son, Redmond, in 1985. Although they officially ended their romantic relationship years ago, the couple remained extremely close to the end, with O’Neal saying shortly before her death
he has never loved her more.

“In the last two years, I love her more than I’ve ever loved her…I look at her with awe,” O’Neal, 68, told Today Show host Meredith Viera.

The courageous performer put aside all vanities and filmed her ordeal for the documentary Farrah’s Story to inspire others.  “Her big message to people is, “Don’t give up, no
matter what they say to you. Keep fighting,'” says producer and friend Alana Stewart.

In the last days of her life, Fawcett wrote a note to her visiting father that read, “I’ve lived a full and wonderful life. I’ve loved and been loved. I’m happy. I’m ready.”