Mom and Dad on Jon and Kate Plus 8 are in the midst of an infidelity firestorm. The story will not fade away, and Jon has taken to denying his affair once again. 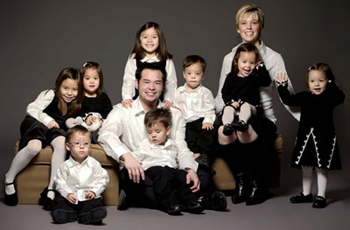 Jon and Kate Plus 8 is one of our favorite reality shows.

We love Jon and Kate’s ability to take us into their home with their growing brood. But we’re not exactly loving the headlines: Rumors are swirling that Jon Gosselin has been less than faithful to Kate. As SheKnows previously reported earlier this week, both Jon and Kate have taken to the airwaves to deny his affair.

Actually, Jon already has. He wants fans of Jon and Kate Plus 8 to know he’s been faithful to his wife. Here’s what’s creating all the buzz.

Last week Jon left a bar in Reading, Pennsylvania, with a woman. The “other woman” says she and Jon are just friends, but her brother claims they’ve been having an affair for three months.

He says, “The bottom line is, I did not cheat on Kate. I am sorry for putting my family in this awkward position.”

His time in the public eye and the press’ possible distortion seem to be making him realize who to associate himself with and more importantly, who not to.

We wish Kate and Jon strength during this time.

Do Will & Jada Pinkett Smith Have an Open Relationship? Here’s What We Know