Zoe Saldana has big shoes to fill. Saldana is JJ Abrams’ choice to play Communications Officer Uhura in the new Star Trek and the actress luckily had the pleasure of meeting the original Uhura.

Saldana first caught global eyes in the Pirates of the Caribbean: The Curse of the Black Pearl opposite Johnny Depp and has the rare fortune of appearing in James Cameron’s return to filming after Titanic. Avatar promises to push the film envelope. Saldana’s career is pushing the upper-atmosphere appearing opposite Ashton Kutcher in Guess Who? and Matthew Fox, Dennis Quaid and Oscar-winner Forest Whitaker in 2008’s Vantage Point.

A meeting of the minds

SheKnows: Were you able to connect with the original Uhura, Nichelle Nichols?

Zoe Saldana: I did speak with Nichelle a couple of times. The response was completely overwhelming. We would talk about that sometimes on set how we felt completely supported (by the original cast). There’s an overall happiness that Star Trekkers will be coming back and that we were stepping in to the family. It made it much easier for us to approach our characters. No only remembering the fundamental essences of all them, but also not being afraid to add any innovation.

SheKnows: Batman, Superman and James Bond have all enjoyed a successful cinematic genesis of late. Once you accepted this role, was there any emotional weight that suddenly felt pushed upon you?Zoe Saldana: That’s where JJ comes in. I thought it was incredibly brave on his behalf to show them as young people. They’re not yet comfortable in their own skin — to see how they meet for the very first time — you kind of start with a clean palette. 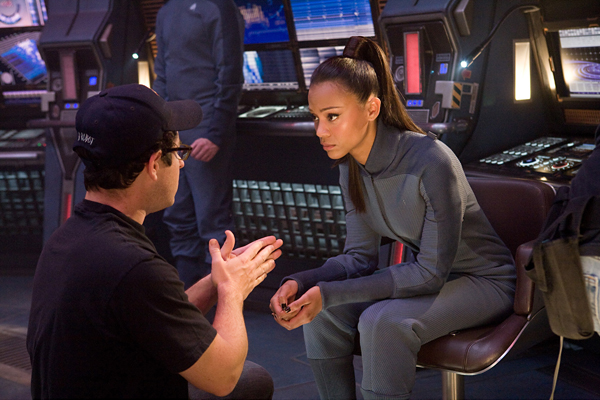 SheKnows: I’ve always thought having the end is a fascinating place to begin a story.

Zoe Saldana: (Laughs) Sometimes knowing the end is really a good perspective on where to start. You know where they end up in terms of the series. But, this is completely different. It says nothing about how they’re going to start. They could be lost. They could be found.

SheKnows: What do you think is the central element of JJ Abrams’ Star Trek?Zoe Saldana: There are all these relationships — all these battles within themselves and each other. And still they need to complete these missions on the Enterprise.

SheKnows: Fans and neophytes alike will be a little shocked by the love story permeating Star Trekâ€¦

Zoe Saldana: (Laughs) If only there was a camera in the office at Bad Robot (Abrams’ company) when they locked us in and we had to read the script. I dropped it and I grabbed my Blackberry and I texting â€˜this man’s crazy. JJ is out of his mind. I am not that aware of Star Trek, but I do know that they never mingle. It’s crazy.’ And then, when I finished the script, it makes so much sense. They share so many characteristics they share. She has this admiration for Spock because he was older and a teacher. There’s this crush, this platonic infatuation with someone who’s wiser, handsome — with pointy ears. Why not?SheKnows: For you as an actress, did you ever feel like you were the only woman in an all-boys’ club making this movie?Zoe Saldana: Of course, and I loved it (laughs).