SheKnows: So, let’s get to the juicy stuff. Were there any romances that went on behind the scenes on the show? Showmances?Fontana: Not that I know of, honestly. Maybe I was too young and naÃ¯ve. I was down on the set at least once a day, checking in to see if things were going okay and saying hi to people and I didn’t see anything. No hanky panky, but again, maybe I was just too naÃ¯ve and I wasn’t looking. I know that everyone practically was married. I guess that Nichelle was not at the time, but she had her son. Majel I knew was with Gene. That was the one (romance) that I knew about. But hey, a lot of stuff could’ve been going on, like I said. I wasn’t there all the time but nothing was that blatant.SheKnows: Did you have a crush on anyone on the production while you were working there? 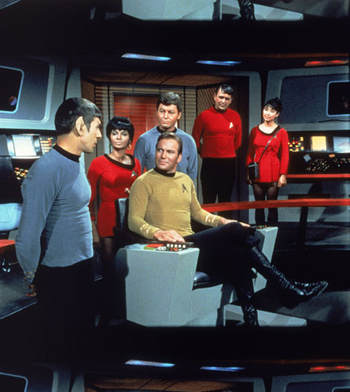 Fontana: No. I really just liked these people because they treated me as an equal which was great. They gave me respect and I respected them. We were always courteous to one another. I was always willing to listen if someone had a problem with a character or a script or whatever. If I had to be the conduit to Coon or Gene Roddenberry I would do that. I think it was a very good relationship on that show. It really worked.SheKnows: I know the Mission Impossible TV series was shooting while you guys were on the Paramount lot. Do you have any memories of mixing it up with those guys?Fontana: The Mission Impossible people had the stages next to ours and so we’d see them on occasion, but they were mostly out and about. They shot on location an enormous amount of the time and then they’d do two days of inserts, all those little close shots of them fiddling with stuff. But (Producer) Bruce Geller was a real good friend of Gene Roddenberry’s and so we’d see him a lot. We helped throw a party. I think it was for Bruce Geller’s birthday and we did it on his stages, but Gene rigged it up so that the minute that Bruce walked into the door the ‘Star Trek’ theme started playing.SheKnows: It sounds like there were a lot of practical jokes going on. Do tell!Fontana: Yeah, there were — a lot on the stage. There were few in the office but they didn’t pull any on me. I was not a victim. They sent me flowers when I was given the job on the show. But Steve Carabatsos (script consultant) was new on the show when I was still production secretary and sitting there in my office and here comes this hose snaking in my window and across my office, out into the hall and across the way. I said, ‘What the heck are you guys doing?’ They had found a weather balloon which they puffed up inside Steve Carabatsos office. It was huge. They tied it off somehow and took away the evidence and when Steve starts to open the door, he goes, ‘What the hell?’ He pushes at the door and it pushes back, again and again. Finally, he managed to get his head around there and the room was filled with this giant weather balloon with a big happy face painted on it! He got them to safely let the air out and then he could have his office back.SheKnows: Didn’t Nurse Chapel (Gene’s future wife Majel Barrett Roddenberry) pull a sexy joke on another writer John DF Black?Fontana: Yes and we were all outside the door listening; me, Bob Justman, Gene, Mary who’s now John’s wife, and we could hear Majel saying (sexy voice) ‘I can do anything you want me to do.’ John’s getting a little nervous and said, ‘Maybe we should have the door open.’ The phone rang and Mary picked up and said, ‘It’s your wife.’ As John went to pick up the phone the rest of us blasted into the door yelling, ‘Surprise!’ But he had been getting a little (excited). ‘I better open my shirt here a little. I can’t breathe.’SheKnows: What about Shatner and Nimoy? Any pranks pulled?Fontana: They were always hiding Leonard’s bicycle all the time, including one time up in the flies, above in the scaffolding. They pulled that on him a lot.SheKnows: Wait a minute. There were starship captains and first officers in costume riding around the lot on bikes? I would have loved to have seen that!Fontana: Yeah, just on the lot. They all had bicycles.SheKnows: Didn’t Dee Kelley who played Dr. McCoy tell you something hilarious from the set at one point?Fontana: When they were shooting (the classic Spock episode) Amok Time, we had T’Pau who was the older (Vulcan) woman (Celia Lovsky) and T’Pring, who was played by Arlene Martel in the show. Dee Kelley came down the street, leaned into my office window and said, ‘Hey. You know what they’re saying on the set?’ ‘No, what?’ He said, ‘You have to pay T’Pau to prong T’Pring.’ I fell on the floor laughing because Dee Kelley was a southern gentleman and he didn’t say stuff like that. He must’ve really enjoyed the joke.

Back to the future

SheKnows: Aren’t there a lot of modern electronics that were inspired by the classic Star Trek? Kids who were fans then probably grew up and invented them.Fontana: Look at your cell phone. You flip it open (like the Trek communicators). Where do you think that design came fromâ€¦and sliding doors, actually. They didn’t really exist at the time. We had two big stage hands pulling the doors, but, not too long after, you started seeing doors that opened on an electric eye.SheKnows: And McCoy’s medical instruments with the pneumatic shot syringes.Fontana: And they do have hospital beds that have readout over the top that take your pulse and your temperature, your respiration rate, etc. A basic readout on what your body is doing. There are a lot of things. ‘Phasers on stun’. Well, what do you think a beanbag gun is? You stun somebody.SheKnows: Have you come across any famous people who’ve told you that they loved Star Trek back in the day or that the show inspired them?Fontana: When I was still production secretary, I answered the phone and the voice on the other end said ‘Hi. This is Leslie Neilsen (of the classic sci-fi film Forbidden Planet and the later Naked Gun series of film comedies). I saw Star Trek last night and I wanted to tell Mr. Roddenberry how much I enjoyed it. He was very gracious. Later on we’d get (fan mail) like, Star Trek caused me to become a doctor or a teacher or to go into the space program or whatever. Those were always very gratifying.SheKnows: And Nichelle was receiving mail from African-American people who said it was inspiring to see a black woman on television.Fontana: Oh, yeah and Whoopie Goldberg said that Trek was a big influence on her, made a big impression on her. That’s another famous person. 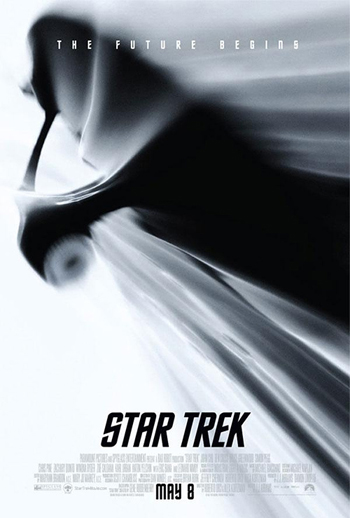 SheKnows: With the new “reboot” of the franchise expected to be a huge hit, do you have any comment at all on the fact that you weren’t consulted by director JJ Abrams?

Fontana: Nope. Nobody asked me, that was it. The word went out that they didn’t want to know from anybody who was on the original show. So I just said, ‘Okay, fine. Do your show.’ I had other stuff that I was doing. It’s not my problem. It’s not my show.SheKnows: As the Star Trek movie gets closer to coming out, do you look at it with trepidation, like, ‘Don’t mess this up,’ or are you hoping it’s good?Fontana: I don’t have time. I have other things that I’m doing. I’m teaching. I’m writing a young adult novel. I have things to do on Star Trek; New Voyages (www.startreknewvoyages.com) for the internet and another project with the same guy, Jim Cawley, who’s just acquired the rights to do Buck Rogers. So I don’t have time to worry about someone else’s Star Trek.SheKnows: There are so many new writing opportunities on the net. What about the new Buck Rogers webisodes you’ll be writing?Fontana: (James Cawley’s) gotten Gil Gerard (of TV’s Buck Rogers series) to agree to be Buck’s father. That can be a lot of fun and it’s really pretty much unexplored. It’s ‘Buck Rogers’ starting after World War I, approximately 1920. This is going back to Buck having been a young pilot in the last year and a half of the war (1918-1919) so when it becomes Buck Rogers in the 25th Century. He’s jumped ahead a whole lot of years!SheKnows: Can you talk a bit more about New Voyages webisodes?Fontana: These are one hour episodes as they would’ve been done on the show, like in the fourth season which never existed. It’s actors playing the original actors playing the roles. They rather resemble them and try to get the mannerisms. It’s very well done and James Cawley spends his own money on it. He’s an Elvis impersonator. He puts like a $100k into these episodes. There are a lot of donated and volunteer services and he has accurately recreated the sets. Before Bill Theiss died, he gave Jim a lot of the material that was used for the original costumes and some patterns.SheKnows: Sounds like he and his team really care about the classic show.Fontana: Yes. It’s done with a lot of affection. They want me to do a story about Joanna McCoy who’s Dr. McCoy’s daughter which never got done on the real series, but people have heard about it for years. There are thirty two million downloads — not hits. So you can see how powerful it is.SheKnows: And you’ve already written a webisode featuring the original Chekov, Walter Koenig, right?Fontana: Yep. It’s called To Serve All My Days.SheKnows: And there was also one starring Sulu, George Takei who has been so visible lately on Heroes. So, the classic Trek legacy lives on in cyberspace. Are you surprised at the longevity of the project?Fontana: Oh, yeah. People ask if we knew we were creating a legend. No. We were just trying to do a good show. Doesn’t that make sense?SheKnows: Yes, of course but it took women like you to help make that happen!