Never before seen online, we have an exclusive clip from the May 5 The Wedding Weekend home video release. The Wedding Weekend stars Molly Shannon, Elizabeth Reaser and Rosemarie Dewitt as college friends gathering 15 years later for the titular festive weekend. 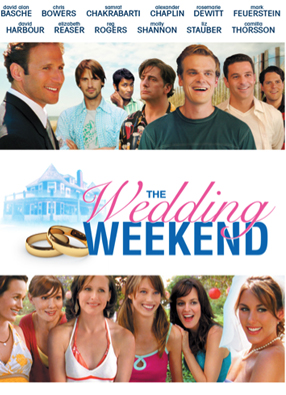 As The Wedding Weekend unfolds, the ensemble cast comes to grips with life’s successes and shortfalls. Besides Shannon, the comedy also stars David Allen Basche and David Harbour from Quantum of Solace.

At the core of this group of friends is college band mates who are reuniting to sing at the wedding of the title.

As they gather at a plush Hamptons beach house, surrounded by family, college ways return in more ways than one.

The film begins with a flashback putting everything in perspective. The clan is singing at the top of their lungs with their entire future lying ahead.The Wedding Weekend is written and directed by Bruce Leddy. Leddy is currently the executive producer and director of MadTV.Weeding Weekend is a comedy award-winner, winning eight film festival awards including the Audience Award for Best Feature at the HBO Comedy and Arts Festival.

Read on for more DVD exclusives