Heidi Montag and Spencer Pratt married in an over-the-top ceremony in Pasadena over the weekend. 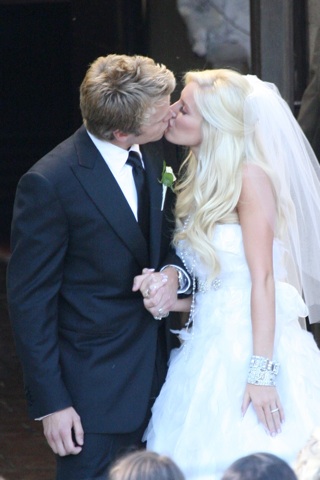 The couple, who met while filming MTV faux reality show The Hills, tied the knot in Pasadena, California while a plane wrote “Spencer Loves Heidi” in the sky above them.A rep for the couple says, “Today, Heidi Montag and Spencer Pratt joined hands in marriage during an afternoon ceremony at Westminster Presbyterian Church in Pasadena, California. Dr. Twining F. Campbell served as pastor in front of 200 family and friends. Afterward, the newlywed couple enjoyed an intimate reception at the Beverly Wilshire Hotel in Beverly Hills, California.”Montag wore a $19,000 custom-made, frothy Monique Lhuillier gown and nearly $1.2 million worth of borrowed Neil Lane diamonds. Pratt and his groomsmen wore Ermenegildo Zegna suits.Heidi and Spencer eloped (to go with their faux reality show) in Mexico five months ago in a spur-of-the-moment ceremony that was not legally binding. While they planned to seal their fate with a courthouse ceremony in LA upon their return home, Spencer had a change of heart for the cameras.”I just want to give you the wedding of your dreams that you have been talking about for three years,” he said on The Hills season-four finale last December. “I’ll deal with it. It’s worth it to be with you the rest of my life. We’ll do it the way you want. I’m sorry. I love you so much.”Guests at the nuptials included all four of Heidi’s parents — even her mother, who vocally opposed the couple’s elopement — as well as music producers Davis Foster and Cathy Dennis, who worked on Heidi’s ridiculously bad album and the cast of The Hills (even frenemy Lauren Conrad).Hills mate Audrina Patridge says the couple was meant to be. “They’ve been together for so long, and they are two peas in a pod,” she says. “I mean, they are Heidi and Spencer! I can’t see either of them with anyone else. Heidi loves him.”

Read on for celebrity marriage news: