Ashley Tisdale premieres her music video for It’s Alright, It’s OK! and we have it! The High School Musical sensation, mirroring her co-stars Zac Efron and Vanessa Hudgens, is branching out beyond the Disney walls of song and dance. 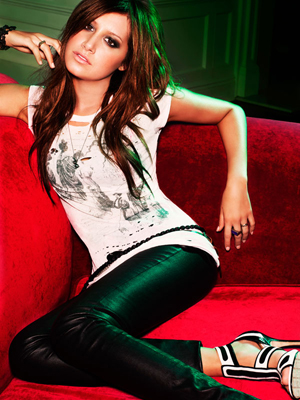 Tisdale’s latest single features the star of 90210, Adam Gregory, as Tisdale’s ex-boyfriend that bears the brunt of her ticked-off fury.

Guilty Pleasure is more than the name of Tisdale’s upcoming June 16 CD. It describes the aural pleasure of listening to the insanely catchy lead single, It’s Alright, It’s OK!

Tisdale writes her own music and sees the opportunity that she’s received with her High School Musical fame to let the world see the true Ashley Tisdale. That artist is a singer-songwriter who enjoys guitar-driven pop who is also a person you do not want to cross, apparently! Like Zac Efron and Vanessa Hudgens, Tisdale is proving her own talent outside of High School Musical

In 2007, Tisdale produced Headstrong and the album hit the Billboard top 5 and taught the singer lessons in pop. “Headstrong was a big learning experience, as it was my first album,” Tisdale says. “This time I went in knowing exactly what I wanted to do and the message I wanted to put out there, which is that I’m 23 and I’m not just the cute, bubbly blonde girl you know from Disney. I have a tougher side and I love rock music, which are things people probably don’t know about me. On each album you get to share with the world who you are as a person, and I wanted my fans to see another side to me. This album really reflects who I am at this point in my life.”

“I’m growing up and this is music I would listen to,” Tisdale says. “On this record, I’m not catering to anyone other than to who I am as a person. I think all of these songs have a message and a story that anyone can relate to. I couldn’t sing them if I didn’t connect with them myself.”

Read on for more HSM stars