Zac Efron graduates from High School Musical by turning 17 Again, partying with FunnyorDie.com and hosting Saturday Night Live April 11 — and he visits with SheKnows to talk about it all! 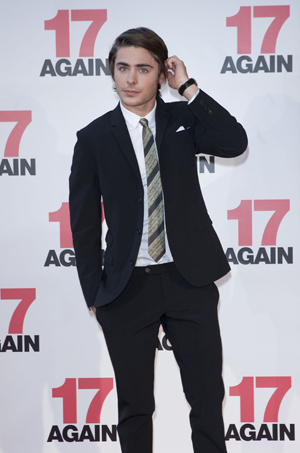 Disney fan or not, you’ve likely at least heard of Zac Efron. Not only was he at the center of the of High School Musical pandemonium, but he’s also still dating his leading lady – and the only HMS star prettier than him – Vanessa Hudgens. All this makes him tabloid fodder, while his good looks and young body make him an easy sell for the paparazzi.

In fact, when a light flashes halfway through our interview with Efron, he literally jumps, losing his train of thought, and then smiles apologetically. “Sorry, I’m paranoid,” he explains. “Whenever I see a flash…”

In short, Efron has already arrived. The task set for him now is proving he’s more than just a Disney megastar. “I’ve always loved trying new things and acquiring new skill sets,” Efron shares. “Before High School Musical, I wasn’t a singer or dancer – or basketball player, even! It was fun to learn those skills. Now it feels like it’s time: I’m ready to try something else.”

That’s why, instead of signing on for more singing and dancing in Footloose, he decided to go for laughs and maturity in 17 Again. Along for the ride, and giving him guidance along the way, were castmates Matthew Perry (Friends), Thomas Lennon (Reno 911! and I Love You Man), Leslie Mann (Knocked Up) and Michelle Trachtenberg (Gossip Girl).

Zac gets in the picture

It all starts back in 1987, where big man on campus Mike (Efron) works up a sweat before the big high school basketball game.

“At the beginning of the movie, Mike is on top of the world and just wants to ‘Bust a Move’ with the cheerleaders,” Efron previews, but Mike’s perfect night takes a turn when girlfriend Scarlet (Mann) reveals she’s pregnant. In chasing down his true love, the basketball star walks away from any chance at a college scholarship.

Cut to 20 years later: Mike, now played by Perry, is cruising for a divorce, crashing at his geeky pal’s pad and trying to salvage a relationship with his kids. He is certain life has passed him by and that it can all be traced back to that one decision in 1987. 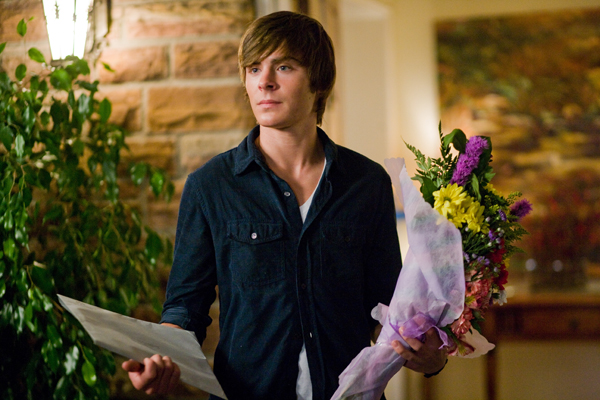 “I liked playing this character,” Perry tells SheKnows. “I liked the idea that he’s a beaten down guy, beat up by life and put upon. It was interesting and reminded me of some movies from the past that I liked a lot: Sort of It’s a Wonderful Life with a little Groundhog Dayin there.”

As with the men in those movies, Mike is given another chance when he stumbles onto a bit of magic and the ensuing adventure is sure to change his outlook on life.

If I only knew then…

When Mike suddenly finds himself 17 Again, he takes his hot young bod and years of experience back to high school, intent on correcting the mistakes of his past.

“Certainly, it’s a theme that has been covered in movies before, but every choice along the way in this movie took it up a notch,” raves funnyman Lennon, who plays Mike’s geeky best pal.

“When I read the script, there were a million things to play,” Efron chimes. “That was the exciting thing about this movie and character. A lot of it was funny, but his mind’s going a mile a minute: He’s 37, pretending to be 17; he’s a dad, pretending to be a best friend. Playing that kind of complicated character was fun.”

For many involved in this project, however, the question was whether the Disney wiz kid could handle such complication, let alone carry the laughs. Producer Adam Shankman famously passed on Efron back when he was casting Hairspray– That is, until his production partner/sister Jennifer Gibgot heard what he’d done!

“The expletives didn’t stop, because she thought he was going to be one of the biggest stars,” recalls Shankman. “She has the nose: The It-factor in him is so high wattage. He changes energy when he enters a room and happens to be more talented than people know. If you’re going to judge him based him on the High School Musicals…he can only do so much better than what the material is.”

Having learned his lesson, Shankman was quick to support his sister in selling Efron to screenwriter Jason Filardi and director Burr Steers for 17 Again. And now? Just about everyone on the team has a new project in mind for Efron.

“When I met him the first time, the thing I was most amazed by was how he can improvise as quickly and skillfully as any improviser I know and his physical comedy was the same,” Lennon recalls. “There was obviously a great script, but there are also some in-betweens and nuances that are just me and Zac having fun together. He’s just a natural.”

The raves, however, go beyond the laughs. “The thing in this movie that was surprising was how women reacted to him making the transition to leading man,” reflects Burr. “It’s a different style of acting. It’s about making that transition from a kid with the face-acting, the indicating and the line readings to being present, listening and responding to things. He’s just going to get better and better.”

Growing up on screen

As a leading man, not to mention one who is supposed to an adult, Efron had to do – or imagine – some serious growing up.

“Mike takes on a lot of responsibilities at a young age and I don’t have that life experience,” Efron intones. “There was one scene, in particular, when Michelle (Trachtenberg) was bawling and I had to ‘console my daughter.’ I didn’t know what I was going to do with the scene, but when I showed up and Michelle was actually doing it, I didn’t have to think about it: My fatherly instincts kicked in.” 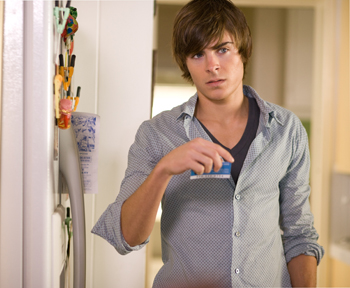 To complicate things a bit more, Efron had to match his performance to that of his older counterpart, Perry. “Before we started shooting, we had a couple weeks of rehearsal,” Efron recalls. “We hung out and read over the scripts a couple times. Highlighted moments that Matthew would be perfect for. It was just me standing in for him.”

“It took a couple of days to realize why he was staring at me so much and watching me move,” Perry teases. “It was fun. We were trying to figure out how each other would do the lines. I was at a Christmas party and my phone rang – making me the envy of every young girl in the world, because it said ‘Zac Efron’! He said, ‘How would you say this?’ I said it into my phone and six months later, I saw it coming out of his mouth!”

As the story progresses onscreen, young Mike finds himself juggling the feelings he still has for his wife, who is now also his best friend’s mom. That meant Efron spent most of the movie trying to woo an older woman.

“I’ve had a crush on Leslie since I was ten years old,” Efron reveals. “George of the Junglewas my favorite movie and she was amazing. I was so thrilled (she was) going to play this part, because I knew it wouldn’t be weird.”

“I was very aware of not making it creepy, because my daughter loves him and I play a mother of a girl who could love him,” Mann adds. “I think we pulled it off.”

Pulling off that same romantic chemistry with Trachtenberg, however, would have been weird. In fact, she was chosen precisely for her lack of chemistry with Efron.

“Zac and I interact like brother and sister,” Trachtenberg shrugs. “It was, from the second that we met, an inherent, fantastic camaraderie. Yes, he’s a very sexy man, but I would hope that when you’re watching the movie and I’m chasing after my father, you’re really creeped out. If you’re not, you could consult a physician!” 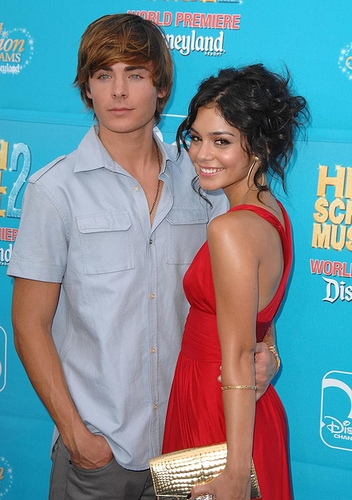 Next up for Efron

With 17 Againset for release April 17 and threatening to lure adults into the Efron fandemonium, the young star seems poised to go wherever he wants, but he’s not looking to use his cache to green light any projects just yet.

“The things I’d like to be doing or feel ready for or wish I could green light are the things that are just out of reach,” he explains. “There may in fact be a project I could green light right now and start filming, but I can’t say that would be the most appealing thing. I want to move forward. It’s about the challenge for me.”

While he looks for the next big project, he’s not resting on his laurels. His next film, Me and Orson Welles, is set for release later this year; he and girlfriend Vanessa Hudgens just hosted a FunnyorDie.com pool party for the likes of Justin Long, Nicole Ritchie, Joel Madden, Queen Latifah, Brody Jenner, Carmen Electra, Lance Bass and Nicole Sullivan (check ou the video video here) and now he’s set to host Saturday Night Livethis weekend, April 11!

“It’s going to be amazing,” he says. “It’s been that dream in the back of my head since I was about 10 years old and there’s an amazing cast. I can’t wait. I would love to do a digital short and hope to get to do something with Andy (Samberg).”

Clearly, Efron is one to keep your eye on. Just don’t expect to find him on any of those new fangled social networking sites.

“I don’t have a Twitter, a MySpace or Facebook or anything like that,” he admits. “I value having people not knowing where I am or what I’m doing. ‘I’m on the toilet…Still on the toilet….almost done on the toilet…'”

We didn’t think it was possible – but yes, that would be too much information Zac!

Read on for Zac Efron news