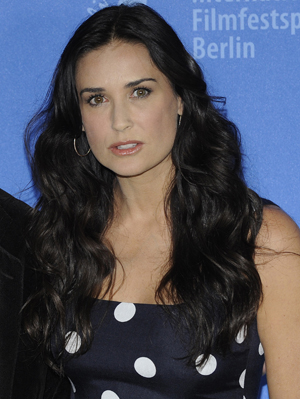 Have you logged onto
Twitter yet? The social networking site may be a bit hard to navigate at first until you simply get hooked. Microblogging is in essence a way to type your thoughts in 140 characters or less. You
can include links, give a shout-out to someone or simply say what’s on your mind.

Superstars such as Demi Moore sure do. She frequently tweets using her username, @mrskutcher, as does her hubby Ashton Kutcher, @aplusk.

It’s quite interesting to check out what your fave celebs are up to and although it may be questionable if they actually post the tweets themselves, we’re guessing they truly do. The
Kutchers have been known to snap a photo on set in France or take a pic of pretty new shoes.

In the latest Twitter news though, something truly important happened recently.

The actress and high profile Twitterer received a message by a woman who threatened to get a knife and cut her arm. Demi Moore replied and the woman responded with the word good-bye. In a matter of
seconds Demi reported the suicide attempt and saved someone’s life. The woman was reportedly in a hospital under care.