Matthew McConaughey heats up the screen in the new movie Ghosts of Girlfriends Past. 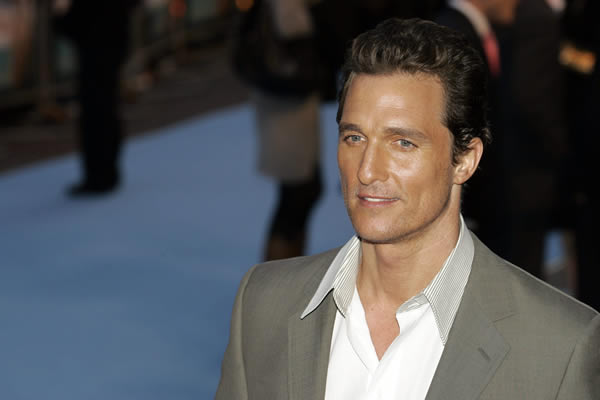 Watch the Ghosts of Girlfriends Past tralier below: In theaters May 1!

Matthew McConaughey is a native Texan turned California surfer boy whose slow charm and chiseled good looks keep women flocking to theaters. Being named People’s Sexiest Man Alive 2005 hasn’t hurt, either.
Matthew began his career while still in school at University of Texas at Austin. In 1993 he was cast in his breakthrough role: the older creepy guy still picking up high school chicks in Dazed and Confused.

The actor parlayed that small role into a highly successful Hollywood career. Parts in Boys on the Side, A Time to Kill, Amistad, Contact and The Newton Boys soon followed, quickly followed by EDtv, U-571, The Wedding Planner, and the immensely popular How to Lose a Guy in Ten Days with Kate Hudson. In fact, there has only been one year since 1993 when McConaughey has not seen a film released.

But Matthew’s personal life has often overshadowed his career. Known as quite the ladies’ man, McConaughey has dated a string of models and actresses, including Sandra Bullock, Ashley Judd, Penelope Cruz and Salli Richardson.

It seems one woman finally has his full attention, though: Brazilian model and baby mama Camila Alves. His official announcement was the usual laid back declaration we’ve come to expect from the actor:

“Got some blessed news…a celebration of life and bounty…a newborn conceived…Yes, my girlfriend Camila and I made a baby together … it’s 3 months growin in her womb and all looks healthy and lively so far.”

Not a surprising statement from a man who was once arrested for resisting arrest resulting from a noise ordinance complaint when cops found Matthew naked, playing the bongos at 2 AM with marijuana laying around.

What many dismiss as flighty actually overlays a deeply spiritual persona. The actor credits several trips to Africa with erasing many of his life’s anxieties, and can often be spotted meditating and doing yoga on the beach near his Malibu home.

That spiritual approach to life is what drives him to give back. When Hurricane Katrina hit, the star didn’t throw money at the problem: he went to the hardest hit areas and got his hands dirty rescuing animals and recording the devastation for Oprah. He even auctioned his beloved 1971 Stingray Corvette convertible to raise funds for relief efforts.

McConaughey is so driven to help communities in need that he created the Just Keep Living Foundation to help children grow into great adults through “programs that teach the importance of decision-making, health — mental, physical, and spiritual — education, and good all-round active living.”

And he looks so good doing it.

Read on for more photos of Matthew McConaughey in Celebrity Photos!