In keeping with his practice of making bigger, better and bolder things happen in the webosphere, Trent Reznor of Nine Inch Nails stopped making music for a few minutes to instead talk music in a new video interview. 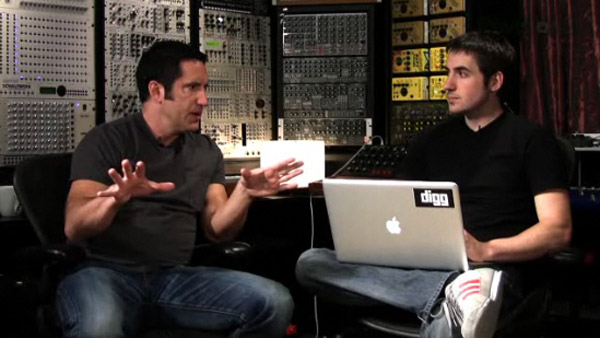 Digg.com founder Kevin Rose flew from San Francisco to Los Angeles this week to meet up with Nine Inch Nails’ frontman Trent Reznor at his studio. There, the two super cyber-savvy dudes had a “Digg Dialogg”: Rose asked Reznor the most dugg questions submitted by Digg readers.Of the more than 4000 questions suggested, the top 10 were posed to Trent Reznor on April 5. The 40-minute video interview was posted to the site two days later (and you can see it below).

While several obscure questions apparently came from those who worship daily at the altar of Reznor, a few actually people hit the (proverbial) nail on the head by broaching topics actually related to NIN’s burgeoning forte: the internet as a music distribution model.For years, Reznor has been releasing music via the web — first offering his work in bonus formats (so fans could remix the raw tracks), then in an ever-growing number of additional forms as the web matured. Ghosts I-IV, a a 36-song instrumental compilation, was made available in March 2008 as a complete download for $5, or could be purchased in various physical formats, including the $300 kitchen sink version that boasted four vinyl LPs, a book, signed/numbered giclÃ©e prints and various other VIP goodies. (Those “Ultra-Deluxe Limited Edition” sets reportedly sold out in three days.)Then, in May of 2008, The Slip was released with no fanfare — and no cost. With well over 1.6 million downloads by summer’s end, the album peaked at #13 on the Billboard 200, and proved — again — that the record industry’s “conventional wisdom” was conventional, yes, but no longer particularly wise.

While on the topic of questions for Trent, we have one of our own: When are we going to get to talk to you? So far, our interview requests have been deflected.We think there is an untapped audience right here — yes, women — many of whom don’t realize that Nine Inch Nails is not what it was 10-plus years ago… and even if the music wasn’t their thing then, maybe it would be now.Hey, we can understand that you may just not be that into us, and aren’t the type to grovel… but we aren’t beyond making a pointed mention of the fact where contextually appropriate, either.