Gisele Bundchen says Tom Brady’s baby is like her own — but his baby mama begs to differ.

Gisele, the highest-paid model in the world, told Vanity Fair that Brady’s son with ex-girlfriend Bridget Moynahan may as well be her own.

“I understand that he has a mom, and I respect that, but to me it’s not like because somebody else delivered him, that’s not my child. I feel it is, 100 percent,” Gisele says. “I want him to have a great relationship with his mom, because that’s important, but I love him the same way as if he were mine. I already feel like he’s my son, from the first day.” 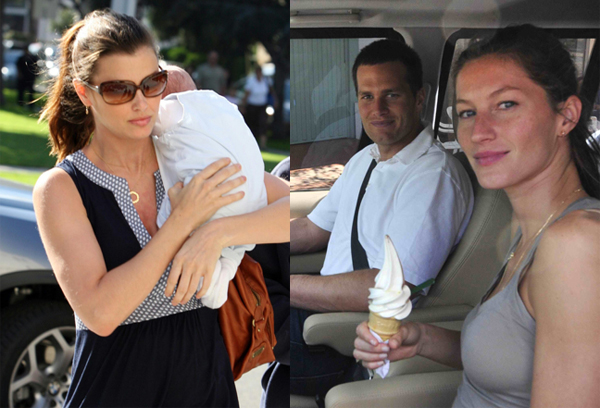 Gisele also admits that she has never met Bridget. To be fair, that’s probably because Tom reportedly left Bridget for Gisele — Bridget later reported she was two-and-a-half months pregnant with Tom’s baby — and although Giselle is six feet tall don’t doubt Bridget has been saving a beat down for the last two years.

While Bridget is remaining classily mum on the subject, as she has since day one, a friend has taken up arms on her behalf.

“If Gisele loved Bridget’s child like he was ‘100 percent her own,’ then she would not talk about him in the press. Discretion and respect are not either of Gisele or Tom’s virtues, as was evidenced even when the child was still unborn and they publicly flaunted their relationship without any discretion whatsoever. Don’t you think Jack will grow up and read her comments and find them disrespectful to him and his mother? If Tom is such a great father as everyone likes to say, then you would think that he’d respect the privacy of his young child and would ask his wife not to use his son as a publicity prop and a subject of public discussion. Is she is so desperate for attention that she can’t find anything more productive to talk about other than Bridget’s child?”

Tom and Gisele recently married in a small, top-secret California ceremony after a hush-hush engagement, continually denied by both.