In Monsters vs. Aliens, Reese Witherspoon towers over her costars. Paramount and DreamWorks’ newest animated spectacular debuted March 27. Watch for the 3-D spectacle to be the box office’s number one movie! 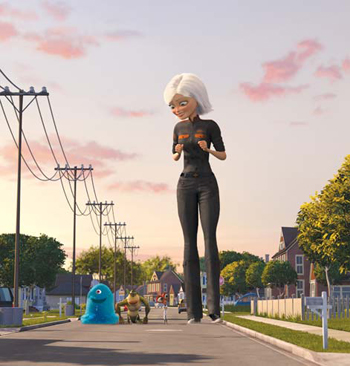 Witherspoon proves there is no arena of film she cannot champion. Whether it 3-D animation in Monsters vs. Aliens, holiday comedy (Four Christmases) and of course drama (pick one…ours is the Oscar-winning Walk the Line), Witherspoon is Hollywood’s go-to girl.

Kiefer Sutherland, Hugh Laurie, Will Arnett and Seth Rogan join Witherspoon on her animated adventure that pits Monsters vs. Aliens. Ever the team player when it comes to crafting a film, Witherspoonseems especially proud of her work for Steven Spielberg, Jeffrey Katzenberg and David Geffen.

As a mother of two, Witherspoon reports the DreamWorks animation offer was one she could not ignore.

“That was probably the hardest thing for me to do,” Witherspoon says of finding her Ginormica character. “I think it’s got an incredible message about finding yourself and your identity. I think everybody — not just girls, but guys, too — struggle with who are you?”

What a fantastic theme! Monster, alien – regardless of how you feel on any given day – the world could be saved by your very presence.

Reese, Kiefer and the gang take us on an adventure unlike audiences have ever seen. Here Reese begins to grow!