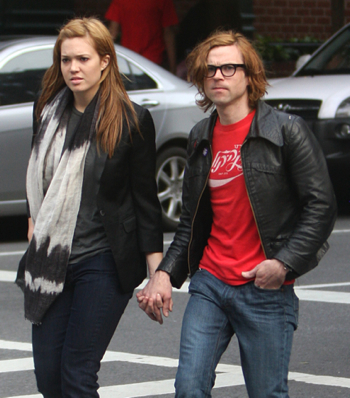 The pair tied the knot on Tuesday, March 10 less than a month after announcing their engagement.Mandy and Ryan shared their vows in a quiet ceremony held in beautiful and historic Savannah, Georgia.When Moore confirmed her engagement in February, she said she hoped to keep the wedding on the DL.”Hopefully, it can happen and slip by unnoticed by everybody,” she says. “I guess we have to be sort of sneaky about it, but I’ll see what I can accomplish.”She also added that throwing a lavish bash was not high on her priority list. “I kind of feel like, because I’ve been able to get married in a few films, I kind of got the whole giant wedding fuss out of my system,” she said.The couple has been together on and off since March 2008. Perhaps they wed on an important anniversary?Mandy talked about Ryan in an interview for the April issue of Marie Claire. She called him “a good egg. I’m in awe of him — his brain, his passion. He’s truly one of a kind.”Ryan is a prolific musician, releasing 11 albums since 2000 and produced and/or contributed to the albums of a dozen other artists. Mandy will release a new album in May 2009, Amanda Leigh.