Robert Downey Jr and Josh Brolin had an incredible Oscar night. The February 22 Oscars saw its share of moments, buit none were bigger or more emotional than when Heath Ledger’s family accepted his Best Supporting Actor award. 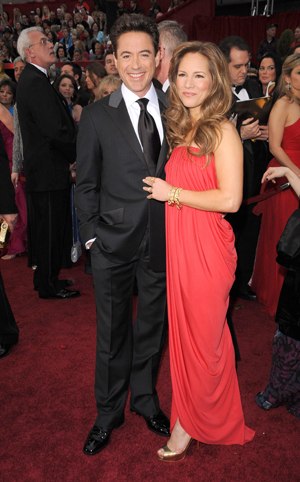 Downey and Brolin shared their Oscar category with Ledger and both were honestly, too pleased to be included in such heady company.

It’s been fifteen years since Downey was nominated for Chaplin and much has happened in the actor’s life since that nomination. “That’s the thing about actors is they have egos. Mine has some extremely liberal viewpoints on myself. I tend to think I should get nominated for everything I do. Once I’ve watched it, it really doesn’t turn out that way,” Downey says.

Here Downey is, with his comeback complete. With or without an Oscar win, the real winner in 2008 at the movies was Robert Downey Jr. From being the Iron Man and setting box office records to his nominated performance in Ben Stiller’s Tropic Thunder – Downey has dominated. “The funny thing is before this Oscar craze, if you look at my character, it was somehow a motivation for him,” Downey says of his Kirk Lazarus. The fictional Oscar-winning actor goes method to the point of darkening his skin to portray an African-American.

“What I think is endearing about Kirk Lazarus and there is no way I could have read the script and thought, ‘It’s Oscar time!’ I was just hoping I wasn’t shot at the premiere.”

Does Downey believe, that although the Academy showed great advancement by awarding a Best Supporting Actor Oscar to a comic book movie character in Ledger’s Joker, they still do not support comedy?

“I remember when I saw Kevin Kline in Fish Called Wanda and there was something so transformative about what he did, it was incredible,” Downey says. Kline received an Oscar for his performance as an off-kilter hit man.

“Watching Kevin’s close-ups, his fingers, and his face – I thought this guy is taking such liberties. I think there is a certain provocateur, for lack of a better adjective, for the surprising courage for some roles that get a chance for Oscar.”

He sought that same attention to detail when tackling Tropic Thunder opposite Stiller and Jack Black. “I don’t know about Oscar and comedy, all I know is Ben Stiller called me up and told me that he had this idea. I thought, ‘that seems like a really, really ridiculous idea – almost terrible humor. Then I read it, and it was actually filled with such smartness,” Downey says. “I thought if — big ‘I’ in if — if it was done right, there was something about it that was transcendent.”

“This is so humbling,” is the first thing Brolin says in the shadow of Oscar’s gold. 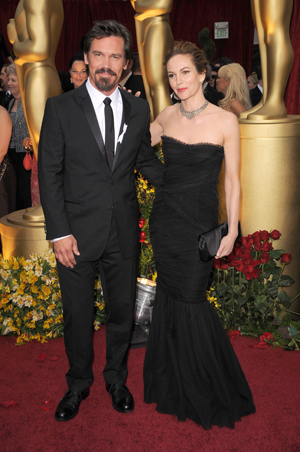 Brolin is a tad shy, but the talk of his commitment to a successful acting career, his nomination for Milk and his relationship with wife Diane Lane, brings a smile. “We had a celebratory moment where we went and jumped in the ocean,” Brolin says of how he and Lane celebrated his nomination. “We really don’t talk about this stuff at home. We wait to talk about it with you.”

We’re thrilled Lane (who we spoke to in October) and Brolin enjoy speaking to SheKnows. As a child of a Hollywood legend in James Brolin, Josh was surprisingly frank about growing up with a famous father.

“I’m in a situation where it’s like ‘Hi Josh Brolin. Your dad this, your step-mom (Barbara Streisand) that — that gets a little old after a while,” Brolin says.

James Brolin did not encourage Josh to pursue acting, but all it took was one lesson in acting and the younger Brolin was hooked.

“He said don’t do it,” Brolin says and laughs. It was not that James did not see promise in his son. It was a case of pure parental protection.

“Then I took an acting class when I was young and really fell in love with this. I love the art of it, the storytelling. From every perspective, from directing to producing, everything, I have a healthy love for all sides of it. Dad said, ‘become a lawyer and have something to fall back on,'” Brolin says.

That is why this Oscar nomination is a personal coming out party. “When somebody doesn’t want you to be hurt by the rejection and all that, and then something like this happens after 25 years of being in love with it – it is a really wonderful, wonderful thing. It’s an honor to be in this crowd.”

Would Brolin tell his daughter the same advice about show business? “I feel the same way my dad did. I have to be supportive like my father was with me. I won’t push it. I’m not a stage mom, personally,” Brolin says. 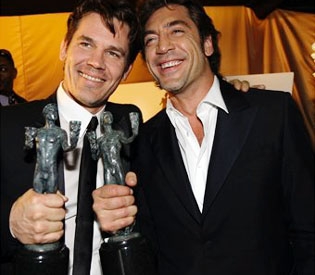 “I think it’s a tough business and there’s a lot of rejection. I was told by a casting director early on that I was too green and I should probably think about getting out of the business. Which fueled me more and more and not all people are fueled by that. With my daughter — if she chooses to do that — she has much more incredible natural talent than I do, so she’ll probably do really well.”

Last year’s Best Supporting Actor winner Javier Bardem starred with Josh Brolin in their Oscar-winning film No Country for Old Men. Bardem was the first on the phone to Brolin to congratulate him on his nomination for Milk.

“He called me from Spain, he was one of the first calls I got. He was running down the streets of Barcelona screaming at the top of his lungs,” Brolin says and smiles. “Javier and I are very, very close and preparation for this whole thing he said ‘allow happiness.’ I believe I have done that.”