Amy Adams says there was nothing special in the water on the set of Doubt. There was something much more magical occurring that had to do with the crossroads of talent, timing and a gifted writer that produced nominations for Doubt’s creative collective. 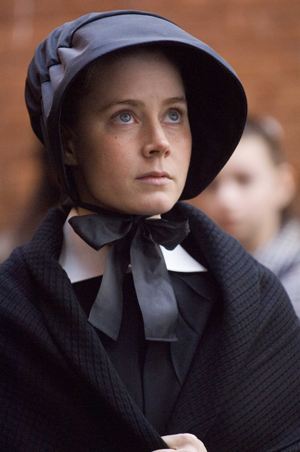 Viola Davis shares her insight with us here

Doubt began as a stage play and Adams believes that is where the film’s true genesis lies.

“John Patrick Shanley developed a beautiful play. And then he did an amazing adaptation for film. They are two very different, very diverse characters,” Adams said.

Shanley also directed the film version that has Oscar nods for all involved.

“I think that he really allowed us to breath new life into these characters that had been so developed on stage. I have to do give the credit to the director and the writer.”

Working with Oscar icons did not hurt Adams in her effort to capture character. “Also, Meryl Streep, Philip Seymour Hoffman and Viola Davis, any time you act with them they bring so much life and energy to everything they do you can’t help but raise the bar,” Adams adds.

“I learned a lot from Meryl. The things I’ve learned working with some amazing actresses is that there’s one thing everyone has in common. We all share a great work ethic. Every time I work with someone like Meryl, it reaffirms that to me. It’s not about celebrity. It’s not about getting attention or being noticed. It’s always about doing your personal best and that’s what they did. It reaffirmed it in me and gave me hope and faith in my career.”

Meryl Streep notched her 15th acting nomination, further expanding her Academy Award record for most nods. I wonder, do other actress ever wish she would take a break?

“I’m really happy for her. She’s an amazing actress who has had years of amazing performances and a quality of work that I envy,” Adams says and smiles. “I think the world of her and we definitely were having fun together.” 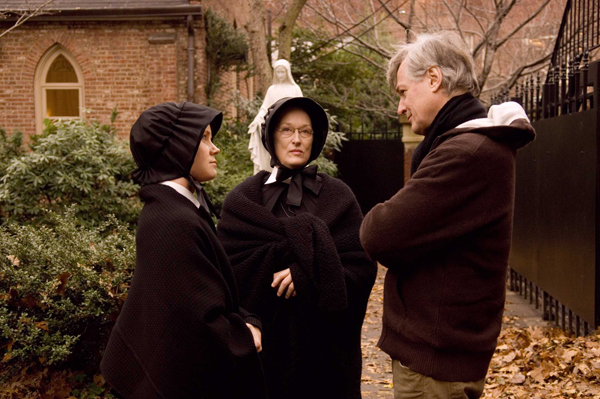 Standing between two golden Oscar statues, Adams is not quite a veteran, but also not a newbie to the Academy’s graces. This is her second nomination. “I’m more able to enjoy it and not get caught up in something that can get you really overwhelmed. It’s like you are being shot out of a cannon,” Adams says.

“I’m grateful that I had this experience and I’m able to process it a little more this time. I’m really enjoying meeting great people and having fantastic conversations like at events like this where you get to see your peers. It’s such a beautiful time to get to celebrate art.”

The actress is equally at home equally in comedy — Drop Dead Gorgeous, Talladega Nights – as she is in independent films such as her Oscar nominated turn in 2005’s Junebug. What truly got her notice was when Adams shot to worldwide fame with her dazzling performance in the Disney instant classic, Enchanted. Adams, at 34, is remarkably grounded for someone so young.

“I’m truly grateful to be here. You can’t prepare for something like this — I think that’s what I learned the first time around,” Adams says. Has she chosen a designer of her dreams?

“As far as the dress, it will happen,” she coyly says.

Sounds as if Adams is completely in her element and this Oscar circus is causing no stress. “This time I’m trying to feel comfortable in my own shoes and you know, make eye contact with people,” she stops and laughs. “I’m here to have a really great time. There’s no way to prepare.”