The wife of award-winning singer Usher is reportedly in serious condition after botched plastic surgery in Brazil. 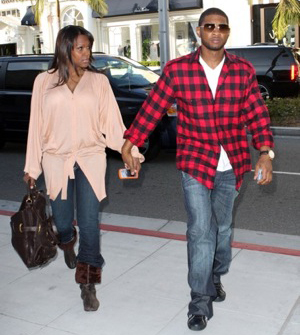 Usher canceled his scheduled performance at the annual Clive Davis pre-Grammy concert Saturday night to rush to his wife’s side in the South American surgery haven. Josh Groban filled in at the last minute.

Usher and hiw wife have two children together: 1-1/2-year-old Usher Raymond V, and two-month old Naviyd Ely Raymond. Could Tameka have gone south for a post-baby tummy tuck? Why would she travel to Brazil for the procedure instead of having it done near the couple’s home in Atlanta?

Brazil is the plastic surgery capital of the world, renowned for plastic surgery tourism packages where patients can bundle procedures together into a week stay. A common bundled procedure includes breast augmentation-tummy tuck-liposuction. Maybe Tameka went for the works and her system couldn’t handle it.

The past week has brought rumors that the couple’s marriage is on the rocks over Tameka’s displeasure at being put on the back burner of Usher’s career. Once billed as his manager, Tameka had been asked to stay behind in Atlanta with the kids while Usher works to regain his place in the R&B hierarchy.