Viola Davis tells us how she feels about the entire experience of working with Meryl Streep and receiving an Oscar nomination for Doubt. We better let Davis explain. 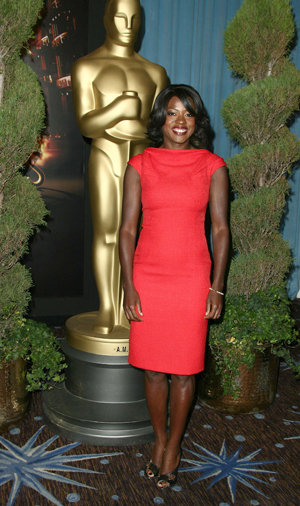 “It’s like what goes through your mind when people say you’re in a major accident and you’re whole life flashes before you and it’s always the most important moments. This would be one of the moments that would flash,” Viola Davis says launching into a hearty laugh flanked by twin golden Oscar giants.

“It’s kind of a rite of passage, a dream. I can’t even imagine it and I’m already in it.”

Davis is somewhat shy about admitting what she did after hearing about the nomination for starring opposite Meryl Streep, Amy Adams and Philip Seymour Hoffman in Doubt. “I Googled myself,” she says. She discovered a connection to her father that had recently passed away on an Oscars message board.

“Someone had written in that their grandmother had worked with my father years ago. She said, ‘my grandmother always said that her father would come to work and say my daughter wants to be an actress. She wants to be an actress!’ It moved me so much. Because to me this is a great culmination of a dream of a young girl who grew up poor and dreamed the biggest dream. I didn’t know if I was going to see it through fruition and here I am. It gives me a great sense of accomplishment.”

Her father was always encouraging and that is why Viola Davis says the message board comments most resonate. “That’s the thing that made it so beautiful. That was a time when I was making $250 a week doing theater in New York, or making nothing. I was going to Julliard, living on Spam. But there was such a sense of pride in me having this dream to become an artist. And so, he was proud of that,” she says. This was long before working with Meryl Streep and the riveting Doubt.

“There wasn’t even a huge amount of success that was coming my way at that time. I think that it was the goal of me wanting to achieve that goal. Someone told me, ‘You have the best parents Viola.’ You know why? Because they are not stage parents — they can just sit there and they just want to be happy for you. That’s the kind of dad I had.” 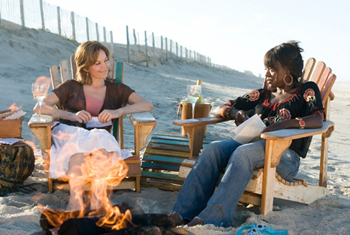 Viola Davis, who audiences certainly remember as Diane Lane’s best friend in Nights of Rodanthe, was more of a Tony Award fan growing up. She did manage to witness a few Oscar nights. “I do remember a couple of years of Oscars. I was always alone in my fascination of the Oscars and the Tony Awards. That’s what singled me out in the family as the one that was going to become an artist. I have to say I never imagined winning an Oscar,” Davis says. “A Tony award, yes. An Oscar, no, that was almost too big for me. Which is very strange — I imagine it now!”

How has this changed experience changed Viola Davis?

“The obvious things, my family loves me a little bit more,” she says and laughs.

“No, not really, but my sister calls me from Rhode Island and she’s getting her Oscar dress ready and she’s calls me three times a day to say how much it’s changed her life. How proud she is of me and how she bought a purple dress from David’s Bridal. There’s a big marquee outside of Central Falls Senior High School that has my name on it.”

The Doubt star admits to us that there has been a noticeable alteration in the way people view her since starring opposite Meryl Streep and basking in Oscar’s glow. 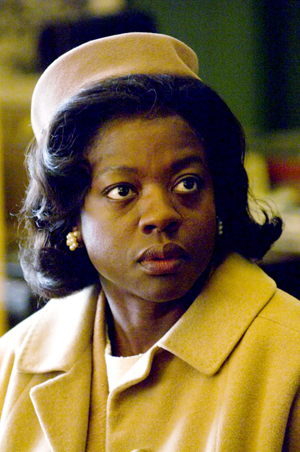 “People look at you differently. It’s the same people who say you before, but now it’s kind of a divine light around you. Which I accept,” Davis says and laughs.

Mirroring many stories that have graced Oscar’s stage, Davis is able to put the entire phenomenon in perspective. “I’ve taken rejection most of my life. It’s what you get used to in this profession. Strangely enough and I’m kind of ashamed to say this, this nomination has given me a real big boost of confidence. I feel like I’m on top of the world in some way. It’s suddenly been the medicine that solved my shyness my sense of cuteness. It’s hard not to feel cute walking in front of all those cameras here on the red carpet,” Davis says and poses with a huge smile.

“Ninety-five percent of the people in this business face unemployment at any given time. I have absolutely been amongst them. I have been in mice infested apartments. I have seen it all. I have been 40 pounds heavier and people looked at me like they didn’t see me. I played basketball courts in one woman shows. I’ve seen it all. This has been just pure joy. I truly feel I wanted to find a way out of my life when I was younger with poverty and living in a small town. I didn’t know if I could do it. This is everything I could hope for and more.”

Stay with SheKnows as our Oscar interviews continue. In the upcoming days, look for my chats with Davis’ co-star Amy Adams, The Wrestler’s Marissa Tomei and Tropic Thunder star Robert Downey, Jr. All my chats are from SheKnows attending the Oscar nominee luncheon – it’s a tough job, but someone has to bring our readers the biggest names in entertainment.

SheKnows goes to the Oscars: our complete coverage
Lunch with Oscar: Frank Langella discusses Frost/Nixon with SheKnows
Kate Winslet tells us about being a five-time nominee