Etta James is no fan of Beyonce. 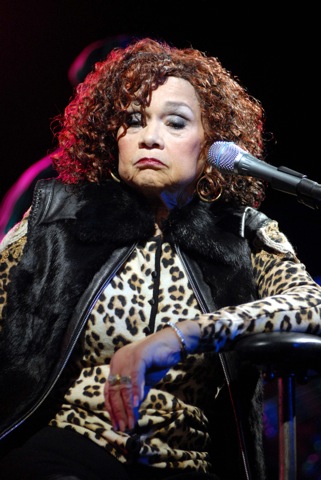 Etta James ripped Sasha Fierce at a recent concert, exhibiting blatant envy over not being asked to sing at the recent inauguration festivities.

“You know, your President, the one with the big ears — he ain’t my President — had that woman singing for him at his Inauguration,” she said. “She’s going to get her ass whooped. How dare Beyonce sing my song that I been singing forever. Now I’m going to sing it for y’all…”

“The great Beyonce,” James went on. “Like I said, she ain’t mine. I can’t stand Beyonce. She has no business up there, singing up there on a big ol’ president day, gonna be singing my song that I’ve been singing forever.”

Interestingly, James did not seem to mind Beyonce’s acclaimed portrayal of her in the film Cadillac Records, where Beyonce first performed the song.

Beyonce told MTV on the red carpet for the film’s premiere that James told her, “‘I loved you from the first time you sung.'”

James’ graceless public bitterness over her inaugural snub elicited no comment from the Beyonce camp.