Tori Spelling is back in the zip code that made her famous, 90210. Fans went crazy as two former co-stars were spotted filming in Beverly Hills. 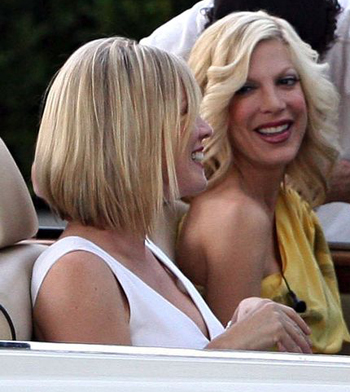 After circling around the 90210 reunion show for some time, Tori Spelling is finally back in the zip code that made her a star. At one point Spelling was cast in the show, but due to rumored salary disagreements, she left.

Original 90210 stars Jennie Garth and Shannen Doherty have been enjoying some renewed success courtesy of the new show’s success. We don’t know what happened to Tori over the last several months to change her mind to once again consider moving back to 90210.

The Donna and Kelly reunion will soon be at hand. The CW is tight-lipped about the plot details. But, we can confirm that Spelling will be on 90210 during this season. She was spotted on the set yesterday (photo at right).

So, not only did Donna Martin graduate, but she will return to help cement her fictional Beverly Hills legacy.

Word has it that Spelling’s Donna is all grown up and a successful businesswoman. Donna has found most of her success in Japan (much like a terrible heavy metal band) and now has returned to Beverly Hills to shake things up.

Filming a scene in Beverly Hills yesterday was Garth and Spelling in a convertible Rolls-Royce to the delight on onlookers everywhere. A chorus of OMG’s could be heard emitting from the sidewalk as the realization came to pass: Tori Spelling is back on 90210. Why else would a camera be following Garth and Spelling as they drive the through the titular town? Exactly! Donna’s back!

As the paparazzi swelled to the scene to photograph the moment, Spelling – ever the target of photogs lenses – brushed the mayhem aside. “Just another day out,” she says and laughs.

Where’s David, her beau from the series? Brian Austin Green is currently one of the stars of Fox’s Terminator series, The Sarah Connor Chronicles. Since 90210 is now on The CW, we’re not sure how the cross-over will work. But, we can say that Green’s character is mentioned. Donna and him are “having problems” in the Donna returns plotline.

The cast of the new 90210 shares their view
Tori Spelling has baby number 2
Brenda and Kelly: the story of a friendship