Bruce Springsteen, after rocking the Super Bowl halftime show, is in a bit of a bind with his millions of working-class fans. 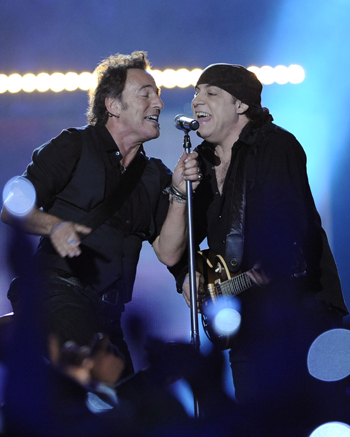 Bruce Springsteen, the New Jersey icon, recently spoke from his heart and apologized to his fans for essentially looking like a hypocrite.

After all, the rocker is an advocate of worker’s rights so technically what gives when it comes to selling one of his albums exclusively at Wal-Mart? The chain has often been accused of questionable labor practices.

He dished with the New York Times, “It was a mistake. Our batting average is usually very good, but we missed that one. Fans will call you on that stuff, as it should be.”

While some may say Springsteen slumped to the lowest low and sold out, others may disagree saying that Wal-Mart provides countless Americans with bargains.

Plus, the practice worked wonders for The Eagles most recent album. It has sold millions.

In any event, Wal-Mart has responded to the Boss: “Millions of Springsteen fans have counted on Wal-Mart over the years to deliver his music into their lives, and we will continue to offer those fans this Greatest Hits exclusive and his other popular albums at unbeatable prices,” the corporate giant says in their statement.

“We are proud of the good jobs, benefits and career opportunities we provide to more than 1.4 million U.S. associates who choose to work at Wal-Mart and serve our customers every day.”

The Boss’ effort for Obama
Bruce and Beyonce at the Inaugural concert
Bruce Springsteen is clearly on the top patriotic songs list, but who else?
Springsteen is also on our list of songs with irrelevant song lyrics!