Jennifer Hudson made a rousing return to the stage at the 2009 Super Bowl. Hudson received a standing ovation for her powerful rendition of The Star-Spangled Banner. 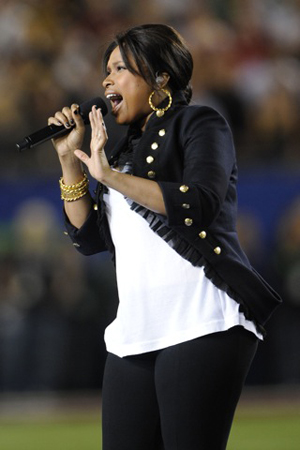 The pre-game show was the first public appearance by Hudson since the violent slayings of her mother, brother and nephew in October. Hudson’s estranged brother-in-law — the boy’s step-father — has been charged with the murders.

Other pre-game ceremonies honored the flight crew of the US Airways plane that crash landed in the Hudson River in January, resulting in zero fatalities and only minor injuries to passengers.

Hudson rose to fame as an American Idol winner, and went on to win an Oscar for Best Supporting Actress for her role in Dream Girls.

A rumored inauguration appearance amounted to nothing; close friend Jamie Fox said Hudson did not want her first step back into the spotlight to be at such a monumental event where she would be asked too many personal questions.

Hudson’s performance lasted a full two minutes, 13 seconds, and despite her initial appearance of apprehension, Hudson launched into an unforgettable performance after taking a deep breath.

“This was such an important performance, because it’s the first time everyone has seen Jennifer,” says pre-game show producer Rickey Minor.

“But she’s in such a great place, with such great spirits and time can heal her wounds. She’s on fire right now and totally grounded.”