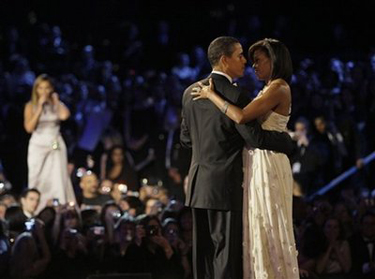 Michelle, who kept her choice of gown top secret until the moment she stepped onstage at the Neighborhood Ball, chose designer Jason Wu to create her vision for her formal debut as the country’s First Lady.

The one-of-a-kind gown, made of ivory silk organza embellished with Swarovski crystals and silver thread embroidery, featured a single shoulder added by the First Lady to avoid the slippage associated with strapless gowns.

The last first lady to bare a shoulder at an Inauguration ball was Nancy Reagan.

Michelle’s choice has made a career for Wu, the 26-year-old designer. “This is a huge moment for the designer,” says Joe Berean, fashion director for InStyle.com.

“Not only did she look stunning and modern and beautiful, but she’s really done something for this amazing young designer.”

Earlier in the day, Michelle emerged in a lemongrass dress and coat by another up-and-coming designer, Cuban-born American Isabel Toledo.

She accessorized with green J. Crew gloves and matching shoes by Jimmy Choo. Both dress and coat were lined with pashmina to protect the First Lady from the bitter Washington, DC winter weather. 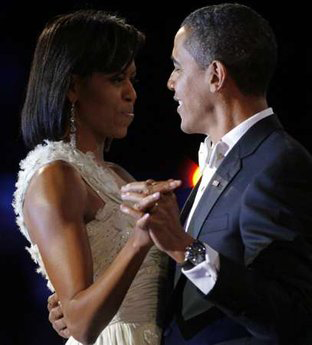 First daughters Sasha and Malia were also very stylish in their J. Crew coats. Malia, 10, wore a double-breasted blue coat with darker blue ribbon bow at the waist, and seven-year-old Sasha donned a pink coat with an orange scarf and belt, with the hem of her coral dress peeking out.

The Presidential couple danced the night away at each and every official ball held on Inauguration night, laughing and clearly enjoying the momentous historical occasion.

“First of all, how good-looking is my wife?” President Obama asked the crowd at the Neighborhood Ball, before leading Michelle around the dance floor while Beyonce sang Etta James’ At Last — a version of which was played at every ball for the couple.

Later, at the Youth Ball, the new president explained to the all under-35 crowd that he and Michelle were kickin’ it “old school” on the dance floor.