Julia Roberts and Erin Brockovich is a sure-fire bet for movies that inspire. Brockovich’s tale, as embodied by Roberts, illustrates the perfect inspiration a film possesses to keep the New Year, New You fires burning. 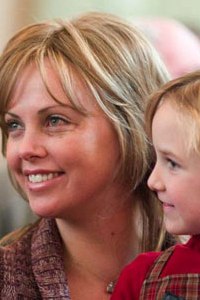 Military women,
farmers, union organizers and a pop superstar highlight our Top 10 inspirational films for women in the New Year. May these 10 motivational movies empower your dreams in 2010, whatever they may be
or however vast the aspirations!

Charlize Theron as Josey Aimes equaled Oscar nomination for Theron. The story of a
women seeking union help for herself and army of laborers is a lesson in how one person — man or woman — can change the lives of the many.

9. Places in the Heart

Places in the Heart is an Oscarwinning that stars Brothers and Sisters matriarch Sally Field as a widow in
the Dust Bowl of 1930s Oklahoma trying to keep her farm and family together when all signs point otherwise.

Besides introducing the world to actors John Malkovich, Ed Harris and Danny Glover, Field shows an equal sense of fierceness and compassionateness that is required of a woman whose world is
collapsing – yet she still has the control to save. The tornado scene shows why Field is a go-to actress when it comes to portraying women that inspire. 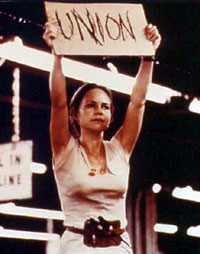 Speaking of Field, watching the Oscar-winner holding a ‘Union’ sign in Norma Rae is a visually legendary moment in movie history.

Norma Rae works at the local plant and when a union man shows up to inspire the workers to unite.

Trouble erupts in the fight for the basic rights of workers everywhere. Field won an Oscar and Norma Rae not only represents girl power, but also the strength of people power as led by a
powerful woman.

Could not decide between these two military movies where the hero is a heroine. We’ve got a tie.

In Courage Under Fire, Meg Ryan is the subject of the hero worship where over the course of the intense film, it comes to light that
she in a fatal effort, is a national hero.

In GI Jane, Demi Moore joins the elite Navy Seals. While dodging bullets, chauvinism, and self-doubt finds the inner strength to
save her fellow soldiers and herself.

Tina Turner’s story is a well known tale. Putting up with years of abuse while channeling a God-given gift of singing earned Turner a new
legion of fans.

Audiences who pay tribute by listening to Turner music by keeping in mind that the voice on that CD is from a soul that has endured unspeakable personal trials to emerge a Grammy winning,
international superstar. 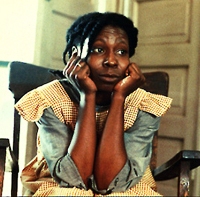 Two actresses who almost never appear in film anchor The Color Purple. Both Whoopi Goldberg and Oprah Winfrey packed so much
sisterly emotional fortitude that neither found cinematic success of this kind again. Alice Walker’s classic story of sisters separated by racism, the times, overbearing and abusive men in
the hands of Steven Spielberg is pure inspiration in both words and image.

Working Girl begins with a great cast. Melanie Griffith in a career defining role, Harrison Ford
and Sigourney Weaver support Griffith in the incredible telling of the story of a secretary with dreams larger than New York’s skyscrapers. Alec Baldwin’s there too!

Decades later, Working Girl resonates with fire. That final scene, when the camera pulls back and Griffith’s view is revealed from her new office, women everywhere triumph in their
belief that the sky is the limit when it comes to the possibilities they can accomplish.

Throw in a fun love story with a guy (Ford) who is supportive, smart and sexy, and Working Girl possesses all the elements that inspire. Most importantly, try to watch Working
Girl and fall right to sleep — can’t happen. Don’t even try! Your mind will race with the possibilities in your own life.

Michelle Pfeiffer proved she could compel audiences with her name alone atop the movie poster with Dangerous Minds. Lost in the film’s enormous success is the fact that the true
story as portrayed by Pfieffer speaks to the unmatched influence that not only a teacher, but a maternally in-tune person, can achieve with even the most far-out lost souls.

Director Steven Soderberg spun Oscar gold in yet another inspiring true story about a woman who, while balancing family, love and life stresses, manages to change the world. 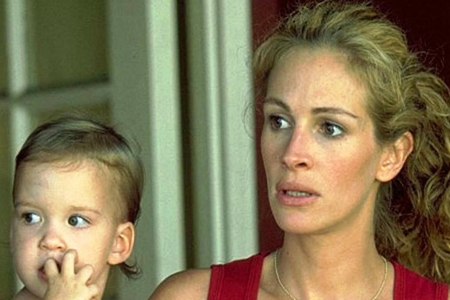 Julia Roberts spellbound audiences, Oscar voters and the acting world with her portrayal of social crusader Erin Brockovich. Watching
Roberts balance the demands of raising several young children, paying bills and keeping her job that she is under qualified for, but solidly passionately qualified to succeed.

Whether it is Brockovich’s maternal instincts or her innate sense of right and wrong, her crusade against a Southern California power company is the stuff of legend.

Never refusing to give up and take no for an answer, Erin Brockovich is a model woman and movie for our times. Ever talented, compassionate, capable of greatness and most of all capable of
balancing more balls in the air than any world record holding juggler, Roberts as Brockovich actually
provides both men and women the spark to change the world.

The Blind Side works on so many levels, it is hard to know where to begin to find inspiration in Sandra Bullock’s performance and the story of the Tuohy family of Tennessee.
Leigh Anne Tuohy famously took Michael Oher, a homeless teen from the Memphis projects, into her home.

Your mind easily races to the possibilities in your own life to not only make a difference in the community around us, but also how that change alters us more than it affects those
impacted by the generosity of the human spirit.

10 Resolutions for your health

50 Ways to get organized this year