Why her Sanctuary shines

SheKnows: So what has made you so passionate about this project in particular?

Amanda Tapping: Partly the people I’m working with, because I don’t think our company will just be Sanctuary, there are other opportunities for it. Then Sanctuary itself I think is such a cool premise, and such an interesting show, and this is an interesting time to be making it. Because of the technology that we’re using and because of the possibilities we have with the green screen and with the RED one camera (a digital video camera that captures images at more than twice the resolution of a high definition camera).

But at the heart of it, it’s an amazing story and a really, really, awesome character — great women characters on this show. I love a show where the lead is a woman, and one of the other leads is an amazingly strong woman. The back story is amazing to me, the history between Magnus and Druitt, 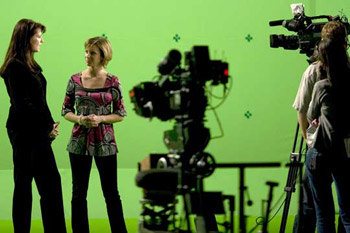 the history that she’s lived. She’s an awesome character, I absolutely love her, and so I can get hyper-passionate just talking about Helen. She’s so cool — she’s so not like me. The challenge as an actress is so cool.

SheKnows: Well there’s a hundred-odd years of history to deal…to go back and do that in the context of the show. It must be a lot of fun for you, too.

Amanda Tapping: It’s very fun, it’s very fun. We’re actually talking now about spending a bit more time going back and seeing the different things we’ve alluded to — trying to do it without that hammering over the head. This is a woman who’s actually known a great number of presidents and artists and writers and some of the great minds of her time, so there’s a cool back story there that we tap into.

She’s unapologetic and hugely compassionate, but also very reserved, and so I find the dichotomy of playing her — this Victorian era woman living in modern times with a daughter that she works closely with — who’s also a woman who could be killed as a result of the work that they’re doing. There’s all this nuance to her: “Wow, she brought this child into the world. Why would she do that?” There are so many choices she made that sort of question it and you go, “Oh, well, let’s dive into that.” Never dull.

SheKnows: Is it hard acting against nothingness and trying to reference things?

Amanda Tapping: I guess the best way to describe it — and I’ve said this before in interviews — is that it feels like you’re doing theater. You’ve got a very minimal set, so the focus then becomes the relationship between the characters and your relationship to the words that you’re saying, your connection emotionally and even physically to what you’re saying, what you’re doing at the time. Strips away all the beauty around it, and the beauty then just becomes the moment. 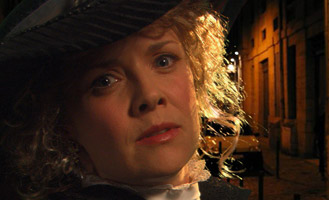 It forces you to play absolutely in the moment — no distractions. So in a lot of ways, it’s actually more challenging because you don’t have all of the things around to work with. But in other ways, so much simpler, because it’s just about the words and the work and the connection between the characters.

SheKnows: …and that ultimately comes out in the quality of the show.

Amanda Tapping: I think so. I think so — I think there’s some really raw, beautiful connections that have been made, and they’ve been made because we’ve had nothing else but the work and each other, and so it’s kind of lovely. It’s kind of doing really minimalist theater. And then you add this really beautiful backdrop months after the fact, and you go, “Oh my God, that’s great.”

SheKnows: So you’re still excited the first time you see the end result?

Amanda Tapping: Oh God, yeah. Yeah — in fact, it always looks better than I thought it would. You know the first time I actually saw the big pan down shot of the Sanctuary, I was like, “Are you kidding me?! That’s the scene? Oh my God!” The three of us get little “Whee!” moments when our effects house emails us the latest renderings. (laughs) We all pore over the computer and squeal like small children.

Find out more from Amanda about Stargate & her future here!