SheKnows: So, beyond acting, how involved are you with Sanctuary? I know you have the executive producer credit, but this is really very much your project, isn’t it?

Amanda Tapping: Yes. Damian [Kindler] conceived of the show, and when he brought it to Martin [Wood] and me, the three of us just took it and ran with it. So on a day-to-day basis, from being involved with pre-production when we were mapping out the stories for the first season, and now we’re doing it again for the second season, white-boarding all the stories, putting together the crew and the cast and the financing.

That was a big part of my responsibilities — getting that together. Because we don’t have the backing of a major studio, and we’re actually doing something quite unorthodox — creating a high-end product which we’re then selling to a world marketplace, so that’s been a huge job. The corporate end of it is the part of my responsibility, and that has been the least fun.

SheKnows: Is that something you’ve had experience with in the past, or how did you end up with that?

Amanda Tapping: No, it’s sort of a trial by fire, but it’s been good. I have a good head for business, and I understand the nuance of business, and I’ve certainly been in the entertainment industry long enough to understand the minutiae of how all that works, so, that’s been an education. 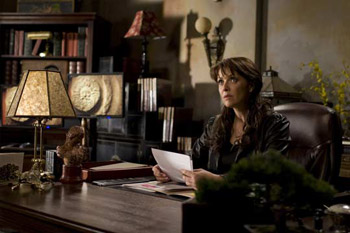 Then beyond that, with the actual day-to-day shooting — not only being the lead actor on the show, but also I feel like my job on set was to make sure everyone was happy, and that the crew was taken care of and that everyone was respected and heard.

And then post-production: I’ve learned about color crafting shows and doing sound mixes and pulling back and all sorts of things I’ve never had the opportunity to do before — editing. So I’m actually heavily involved, from start to finish, and it’s been amazing. I just feel like, as an actor it’s been a great education, but now as a woman. I’m in my 40s and I’m now looking beyond just being an actor, and this has been a great way to sort of branch out my career.

SheKnows: I was going to say it would really help your resume — you could go into all kinds of things at this point.

Amanda Tapping: Absolutely, absolutely — and you should get a feel for how the whole machine works, and then pick your specialty, if you will. For me, I love seeing the whole process.

SheKnows: Is there any particular element, apart from acting, that just really appeals to you, that is fun, not tedious…

Amanda Tapping: I feel I would love to direct again — I like the scope of a job like that. I like the scope of producing, too — going into the office and sitting down with the guys and sort of looking at the overall picture. It’s like having a big wide angle lens on the entire show. I love that. The directing for me is very much the same: You get to take your vision and put it out into every single department, and then put all the pieces together. It’s like putting together a massive puzzle, and so I hope to get the opportunity to do that again.

SheKnows: So, you’ve been Samantha Carter on Stargate SG-1 for ten years, and then you had the year on Atlantis. Did you ever imagine actually playing your character there for that long? And do you think you could play Helen on Sanctuary for that long — do you think there’s enough there?

Amanda Tapping: I didn’t — I can’t. But you know what’s really funny is I couldn’t have imagined playing Sam Carter for that long, either. It’s amazing how quickly time flies when you’re having fun. 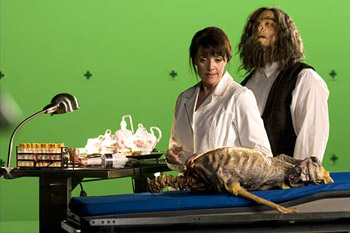 It sounds like a lame little old adage, but it’s absolutely true. Stargate was so joyful, and even for all our ups and downs, it was a great show to work on — an amazing family — and so the ten years didn’t feel like ten years. It honestly didn’t, and people go, “Oh my God, you were on that show for a decade!” and I’d say, “Yeah, but it went by really quickly!”

And season one of Sanctuary was probably the hardest work I’ve ever done in my life, in terms of wearing so many hats. It was exhausting, yet at the end of it I was. “Oh wow, that was great!” So you’re ultimately exhausted and revitalized by the amount of work. So can I imagine playing Helen for ten years? No. It could possibly happen — sure — and would those ten years go by just as quickly? Sure, they probably would.

Amanda Tapping: You know I’m very lucky in that I’m working with two men, particularly Damian and Martin, whom are my best friends, but beyond that they completely respect and admire women, which is a unique position to be in when you’re in a very male-dominated industry.

They will defer to me, and say, “Well, okay, Amanda, what do you think?” As opposed to, “This is how it’s happening.” I love that! It’s very invigorating, and you must find that to be working in a creative environment with people you enjoy working with. There’s a symbiotic relationship, there’s cohesion of ideas and it doesn’t feel like there’s any one-upmanship. We’ve all talked each other off the ledge, and we also know that at any given time that’s gonna happen, but we’re all there for each other.

It’s been almost three years we’ve been working on this, and it’s not only seeing what you build grow, but the joy of watching it start to blossom.

On the next page: Playing against a blank wall, 100 years of history, and what makes her giddy with excitement