Twilight will keep its Jacob. Despite a rumored search for a new actor, Taylor Lautner will return to his role as Jacob Black in the next installment of the Twilight series. 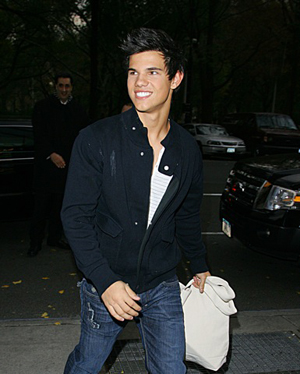 The news
was confirmed today on series author Stephenie Meyers’ website, where she posted the following statement from New Moon director Chris Weitz:

“I’m very happy to announce that Taylor Lautner will be playing Jacob Black in New Moon and that he’s doing so with the enthusiastic support of Summit Entertainment, the producers, and
Stephenie Meyer,” Weitz says.

“The characters in Stephenie’s books go through extraordinary changes of circumstance and also appearance; so it is not surprising that there has been speculation about whether the same actor would
portray a character who changes in so many surprising ways throughout the series. But it was my first instinct that Taylor was, is, and should be Jacob, and that the books would be best served by
the actor who is emotionally right for the part. I think that fans of Twilight the book and the movie will be surprised by the
Jacob Black that Taylor will bring to the screen in New Moon; and I’m looking forward to working with him and the rest of the cast in realizing the film.”

Stephenie Meyer herself had this to say:

“I’d just like to add that I was very much a part of this decision. My first priority was always what was best for New Moon — what was going to give us the best possible movie. I’m truly
thrilled that Taylor was the one who proved to the director, to Summit, and to me that he is the best possible Jacob we could have. And I’m very much looking forward to seeing what he’s going to
bring to Jacob’s character this year.”

New Moon, the second film in the Twilight series based on Meyers’ books, is scheduled for a November 2009 release.

Do you have Twilight fever?

Get the Twilight widget!

Chat with other Twilight fans on our Message Boards