Team Aniston or Team Brangelina went at it at the box office and Aniston wins round one. 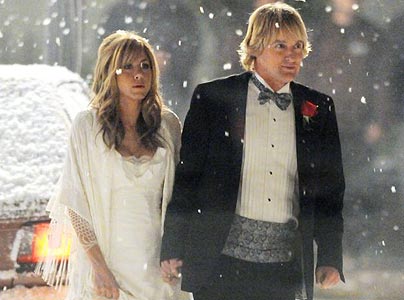 That is, if we’re looking at the box office this Christmas season. As both of their films opened on the 25th, they were technically competing for the top spot, you know — bragging rights!

Jen’s movie, Marley and Me, about a family and mischievous dog, which we hear is a tearjerker where you laugh and cry during the same flick, grossed $14.8 million bucks on Christmas day alone.

That’s the highest one day total for a movie that opened on Christmas.

Before the week was finished Marley and Me took in $36.4 million to take the week’s top spot.

As for Brad’s flick, The Curious Case of Benjamin Button, it didn’t do too shabby.

The Curious Case of Benjamin Button is quite interesting: it’s about a life-long romance between a man who ages in reverse and it’s based on a short story by F. Scott Fitzgerald.

The Curious Case of Benjamin Button opened with $11.8 million on Christmas day.

But we’re not, we’re comparing Jen to Brad. And in the end, let’s focus on their films, shall we? Besides, there’s that Adam Sandler guy who finished in second place with his Disney film, Bedtime Stories.

Jennifer exposed for GQ
Brad and Jenn reunite in Toronto!
Jennifer Aniston is one of our top 10 extreme celebrity makeovers