Paris Hilton says her excessive shopping is just her way of helping get the world economy out of this awful recession. 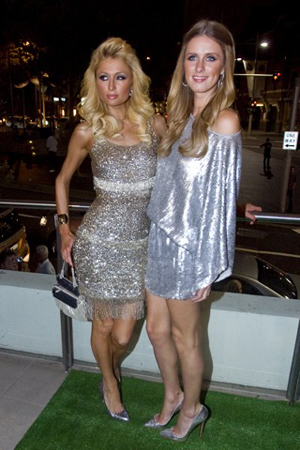 Hilton spent her New Years in Australia where she was reportedly paid over $100,000 to host a New Years Eve party with her sister Nicky and her new fake BFF Brittany Flickinger.

Local press gave Paris a lot of flack for spending $3,844 in 40 minutes during a quick shopping spree considering this economy. But, acting Prime Minister Julia Gillard came to the shopaholic’s defense, commending Hilton for recognizing Australia as a fashion and shopping destination.

Paris responds, “I heard that a politician said that. I thought that was very sweet and it’s true.”

“I’m in Australia, I think it’s important to help out, you know, the economy out here, everywhere in the world,” she continues. “And what’s wrong with doing a little shopping? It’s New Year’s, I need a New Year’s dress.”

What dress did she choose in this slow economy? She and Nicky both showed up in sparkly silver numbers. Gold is too expensive in this economy.