Host Tom Bergeron and Samantha Harris welcomed the audiences via the three enormous video screens. Then, led by Burke, the entire Dancing with the Stars tour cast strutted on stage to thunderous applause. After the first number, Lance Bass took the microphone and set the tone for the evening in terms of emcee duties.

Toni Braxton and her partner, Alec Mazo, dazzled to Santana’s Smooth. Braxton and Mazo entertained the thousands with Dancing with the Stars moves seen in living rooms all fall that were now live and in person.

The stage mirrored the Dancing with the Stars set audiences adore on TV. A black dance floor greeted Maksim Chmerkovskiy, Burke, Derek Hough and the six other professional dancers, who proved to be the true stars of the night.

Watching professional dance is nothing less than a gift. Seeing it performed at its highest level is beyond human. The Dancing with the Stars professionals on the 2008 tour are flawless. Led by Maksim, Burke, Derek Hough, Edtya Sliwinska, Kym Johnson, Lacey Schwimmer and Karina Smirnoff,  their crisp execution of choreography challenging, engaging and jaw-dropping.

Edtya, in particular of the professionals, shines. Her lines were perfect, passion explosive, and above all, showmanship beyond compare on the Dancing with the Stars stage. Whether paired with Maksim on ABC or commanding the stage on her own live, Edtya’s performance proved she is a dancer in search of a star capable of getting this impeccable dancer the Dancing with the Stars disco ball trophy. 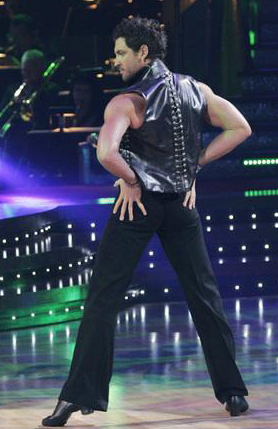 Each Dancing with the Stars season seven pair danced together and after completing their greatest set, grabbed the microphone and gabbed with the crowd. Especially effective in this capacity was Lance Bass, Toni Braxton, dancers Cheryl Burke and Maksim, as well as Burke’s partner, Maurice Greene.

The live band from the show sits beneath the stage the dancers command. Performing current hits including Pink’s So What and Beyonce’s Single Ladies, the Dancing with the Stars tour is current on so many levels. It was only yesterday that these dancers were performing for millions on ABC each week.

As the dance sets transgressed from one another, costume changes were seamless as the director of the Dancing with the Stars tour knew exactly what they were doing when orchestrating a live version of a televised reality TV hit.

Dancing with the Stars news