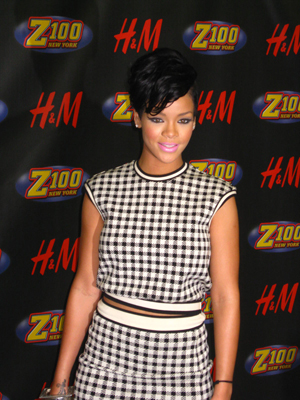 If you’re from New York City, you know the drill. And if you’re not, here’s a little lesson: whether you’re driving around town or at home with the radio on, Z100, 100.3 on the FM dial, is where the dial must be set.

Jingle Ball’s arrive across the country each Christmas season and kicking off the musical fest of pop music’s best is this year’s Z100 Jingle Ball.

It did not disappoint!

Z100’s music rocks, their DJ’s are hot diggity and yes, their annual concert at Madison Square Garden was another impressive sell out. What really stood out this year was Stand Up To Cancer. As Mayor Bloomberg issued a proclamation declaring the day, “Z100’s Jingle Ball Day” to say that excitement in the air was an understatement.

Consider this: Rihanna and Kanye are nominated for Grammy Awards as was Lady Gaga (best dance recording), Chris Brown, Ne-Yo, and Katy Perry. This is an esteemed bunch.

For each ticket sold via Ticketmaster, $1 was automatically donated to the charity with an option to contribute more. Stand Up to Cancer raises awareness and funds to accelerate ground-breaking cancer research that will get new therapies to patients quickly and save lives. 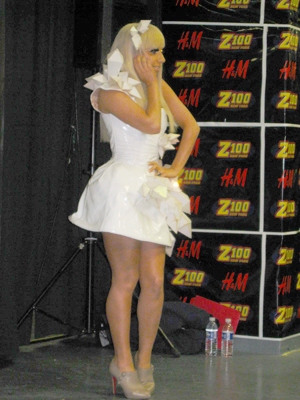 Lady Gaga: “This is not a persona, it’s me in all of my origami glory. That’s really the whole idea. I am a performance artist,” Lady Gaga says. “I’ve been doing performance art in New York City since I was 19 years-old. I make the fashion, write all the music, create all the visuals you’ll see in the show tonight, it’s something that I put together. It’s not a persona, this is who really am. I dress like this all the time. It’s not a look, I live and breathe it. If they took my origami away I’d be kicking and screaming to my coffin.”

To young people entering the stage: “The first thing that I would say is that being an artist is being private and public. You have to play every venue in sight whether there are 5 people in the audience or 5,000, it’s very important to put your art in your room,” Lady Gaga says.

“It’s not until you humiliate yourself and pick yourself up from the floor that you realize the artist you want to be. It took me 8 solid years of pining and pining and bleeding and sweating and scraping at the marrow of my bones for the right sound until I finally found it. I wrote just dance and it finally happened! It’s like giving birth, immaculate conception.”

David Archuleta on American Idol and fame: “You never know how long it’ll last – it can end after the very first audition or it could go all the way to the end. It’s just really cool and you have to keep a good attitude about it – if you focus on the stressful things, there are plenty of things to stress out about but there are a lot of great things to focus on.” 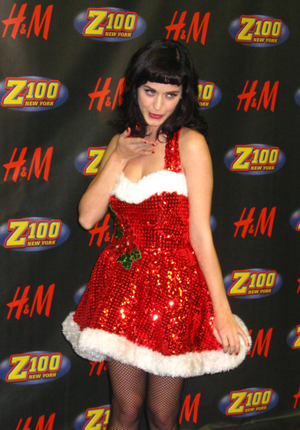 Jesse McCartney on his upcoming film role in Alvin & the Chipmunks: “It’s sort of a multi-generational thing. I grew up watching it every Saturday morning with my cereal. I never thought I’d be playing the young fat little chipmunk.”

The Veronicas on getting showmanship tips from the Jonas Brothers: “No, we taught the Jonas Brothers everything they know (laughs). We actually toured with them in 2006 and they opened for us. That’s our claim to fame. They’re awesome boys. Their show is amazing, they’re very talented boys. Being on the road like that you learn a lot.”