Kenny Chesney walked with his third straight entertainer of the year win at the 2008 Country Music Awards, tying him with Garth Brooks for most wins in the category. 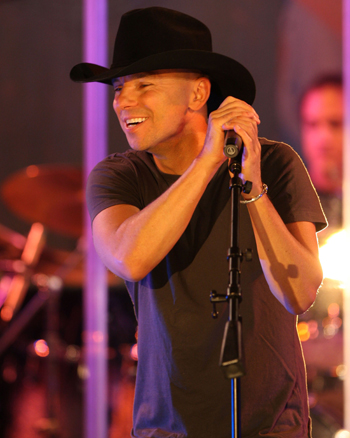 “As much as tonight is about awards, I really believe that being able to stand up here is more about great songs, it’s more about the fans,” said Chesney.

“It’s more about being onstage every night in front of a lot of people that really make it happen for me and the band out here…I’m really humbled tonight and I really appreciate it.”

The three hour awards show featured performances by Carrie Underwood, Taylor Swift, Kid Rock and Lil Wayne performing the Sweet Home Alabama-sampled All Summer Long, and a surprise appearance by crossover favorite Shania Twain, who has been keeping a low profile since her divorce was announced earlier this year.

“It’s good to see you, too,” Twain told a surprised audience before presenting Chesney with his award. “I hope to be seeing a lot more of you.”