It isn’t easy to break into a genre saturated with procedural crime shows, but CBS’ The Mentalist has had no trouble staying in the Nielsen’s Top 10 in its first month. 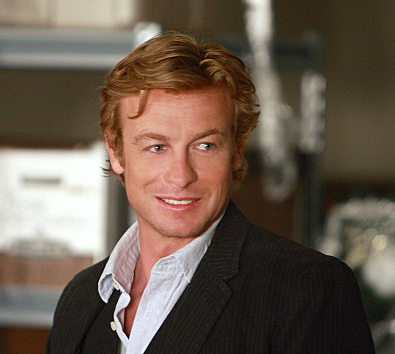 Simon Baker’s handsome, charming and brilliantly odd title character is likely a large part of the draw for audiences, but Baker points to the show’s other strengths.

“It may be called The Mentalist, but what sets it apart from other procedural shows is that you could see the other characters already there too, from the pilot, and they’ve had room to develop as we’ve gone on,” raves Baker in his natural Aussie accent.

“Bruno (Heller, the writer also responsible for HBOs Rome) is great at that and shooting the pilot, I was so excited to see the other actors do stuff with what he gave them. I said to my wife, ‘I’d rather go to work with upstart actors who have the balls to try things, which is risky and difficult.’ A lot of people accept the job as ‘just background characters’, but not here.”

Having starred in the CBS series The Guardian and short-lived Smith, Baker is no stranger to television. In fact, after strutting his stuff for the film The Devil Wears Prada in 2006 with Anne Hathaway, the actor found himself a bit burnt out and in need of a break.

“I’d been sent a lot of stuff for television, but was avoiding it,” he admits. “I was very aware of the process, how difficult and grueling it could be, and I’d moved around with my family to America, to Australia and then back to America. I wanted to readdress what I do, how I do it and my attitude toward doing it, so I forced myself to take a year off. I spent a lot of time at home (in LA), knocking out walls and that type of thing.” 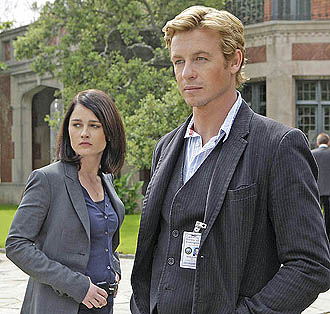 No one says “no” to Martin Scorsese, however, and it was a call from the industry legend that ultimately lured Baker back into the saddle to star in an homage to Alfred Hitchcock.

“It was a long form commercial for Freixenet Spanish champagne,” Baker shares. “That was what broke the drought, and spending that time with Marty was fantastic. He inspired me. I love being onset and the process of what I do, no matter the medium. I feel alive when I’m working and after that experience with Marty, I was ready to go back.”

Once ready, he was won over by The Mentalist script and his character, Thomas Jane. The smart guy is a bit of a handful and also a sexy temptation for his handler at the California Bureau of Investigation, played by Robin Tuney; but at least he’s no longer using his amazing powers of observation to cash in as charlatan psychic!

“I quickly saw how much fun I could have with the character and in the way he sits within the show,” raves the actor, though he admits he’s not half as observant as Jane is.

Baker will concede to having only one thing in common with his deliciously wicked character, who isn’t past using his special skills to have some parlor trick fun.

“I’m a smart ass, or as they always call me in Australia, ‘cheeky,'” he demurs with a laugh. “I grew up watching American TV and Woody Allen films, so I love that style of humor, but Australian and English humor is very different from American humor. Irony has only just landed on these shores, but it’s taken off and I’m here to help it!” 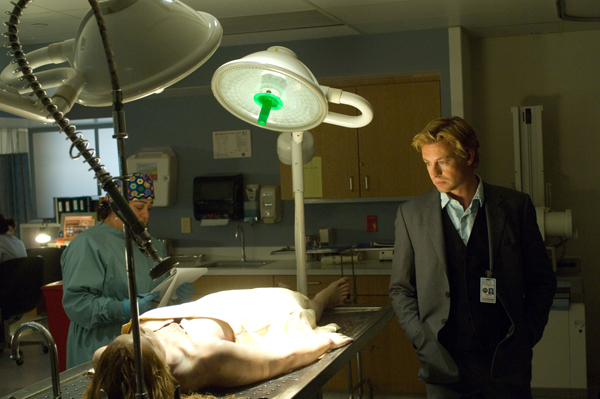 “In Australia, we peg each other down, but people are just so supportive here that it’s uncomfortable,” he continues. “They genuinely like it when someone does well and there’s a lot of encouragements. I’m not used to that! It’s the tall poppy syndrome: Poppy growers in Australia cut the tall poppy down to level things. If someone’s a bit too confident or shines out above the crowd, that person is a prime target. I go home, people don’t compliment me much and I feel like a piece of furniture. It’s comforting.”

The much more ornery Simon Cowell made a similar comment about the Brits on American Idol last year, but don’t think Baker is asking you to give him the infamous Cowell treatment.

“Don’t insult me,” he concludes in warning. “I don’t like to be insulted.”

He won’t have to worry about that, as long as The Mentalist keeps its strong holding on viewers! To see what folks are tuning in for, catch Baker on CBS, Tuesdays at 9pm.