New York City style, glamour and a whole lot of patriotism was front and center on this historic election eve and SheKnows was there with singer Joss Stone! 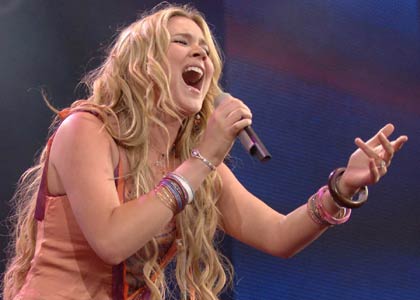 The leading voter registration group HeadCount held its “Get Out the Vote Party” at the Highline Ballroom featuring none other than multi-platinum soul singer Joss Stone!

As Stone took the stage with her new song, Governmentalist, SheKnows was in for a real treat. After all, what could be better than new tunes and an electrifying vibe?

Stone was inspired to write the song, Governmentalist, in response to criticism she received from a government official in the United Kingdom after she spoke out against poor medical care of Iraq War veterans.

The British citizen decided to make her voice heard in the US election.

Keep in mind this woman can’t vote in America yet she still managed to make her voice be heard!

Her new song captures the passions of her generation that’s increasingly active in politics with its desire to hold government accountable.

The New York City appearance marked a rare performance for Stone who has sold nearly ten million albums worldwide. Only 500 tickets were sold to the general public as SheKnows was part of all the revelry and the election – go out and vote!

Super celebs record video with Steven Spielberg to get out the vote
Bruce Springsteen plays a rally for Obama in Philly
Who is supporting Obama in Hollywood?