Eighty-thousand people sang along with Bruce Springsteen on Sunday at a rally for presidential candidate, Democrat Barack Obama. 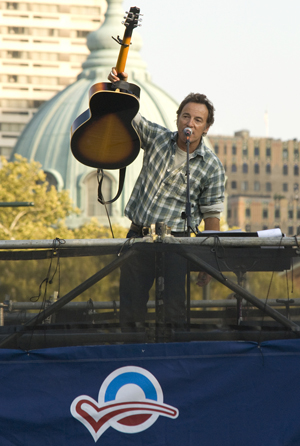 The Boss from New Jersey led the crowd in an homage to the Woody Guthrie classic This Land is Your Land.

The singer wrapped with his song The Rising, referring to the September 11 attacks, drawing tears to the eyes of many in the crowd. Obama plays the song, with Springsteen’s blessing, before taking the stage at all his rallies.

“So I don’t know about you, but I want my country back, I want my dream back, I want my America back,” said Springsteen to a deafening cheer. He said it was time to join with Obama, “roll up our sleeves and come on up for the rising.”

“Our social contract has been shredded. We’re going to need all the angels we can get,” he said, and praised “Senator Obama’s efforts to build a house big enough for all our dreams.”

Springsteen is no stranger to the campaign trail. He performed at rallies for Senator John Kerry four years ago. In the 80’s, he objected angrily to the use of his song “Born in the USA” by Ronald Reagan’s campaign without his permission. Reagan’s camp was mocked by those in the know for choosing the song, which is a harsh condemnation of treatment of vets returning from Vietnam by society and the government.