Tonight, Ghost Whisperer Melinda sets sail with husband Jim for a honeymoon cruise with an angry ghost. It’s called Save Our Souls (get it, SOS) and it was filmed on board the real haunted cruise ship, The Queen Mary.

The Queen Mary began carrying passengers in the 1930’s and was one of the most glamorous luxury liners around. In the 1940’s, the ship was converted into a troop transport to help in the war effort and even carried Winston Churchill to New York to meet with President Roosevelt. In the 1960’s air travel put a dent in the number of people wanting to travel by ship and so The Queen Mary was sold and dry docked in Long Beach, California where it has remained ever since. 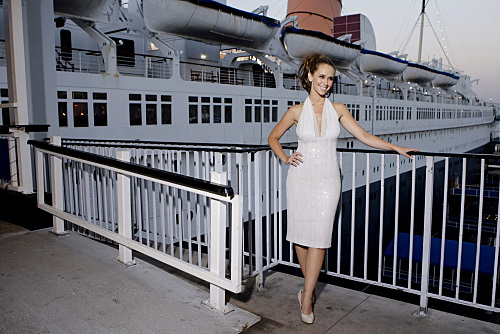 The ship is now a hotel and a popular day trip for locals who want to relive the splendor of the 30’s or meet up with a ghost or two. The two most frequently mentioned ghosts are the spirits of two men who were crushed to death by a door in the engine room (an area that was used for the filming of the movie Poseidon Adventure) and a little girl who appears around the pool.

Other sightings include various ghosts in 30’s period dress and sounds of a baby crying, mysterious smells and plenty of knock, knock, knocks.

Relive the splendor of a long gone era when you board The Queen Mary along with the Ghost Whisperer crew tonight on CBS.