Beyonce has put on a blonde wig and is channeling Etta James for the new film, Cadillac Records. But, that is not the only activity currently generating heat in the Beyonce world. 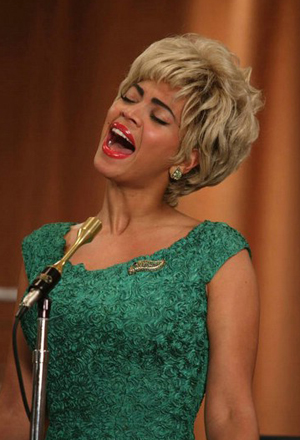 The singer released her Single Ladies (Put a Ring on It) video October 17 and reestablishing herself as the queen of pop. Check it out below!

But if you ask her, the biggest challenge in the Beyonce’s newlywed life is her tackling of the iconic singer – Etta James.

The film follows the true story of the famous record company, Chess Records, as it got going that included a roster of soul sirens including James.

Beyonce reportedly had to gain weight for the role and found the singer/actress comfortable with her new (old) curves.

“I gained almost 15 pounds to play the role,” she says in the November issue of In Style.

“It was way easier – and tastier – than having to lose so much weight for Dreamgirls.”

Her next foray into film after that Oscar-winning movie is already garnering serious buzz. Adrien Brody, Gabrielle Union and Mos Def also star in Cadillac Records.

The movie debuts in December while Beyonce’s latest album is due November 18. And yes, her marriage to Jay-Z is still doing fabulous!

Beyonce: Single Ladies (Put a Ring on It)