Zac Efron and Vanessa Hudgens haven’t allowed rumors, paparazzi attention or one infamous scandal from spoiling their relationship. How have they survived? 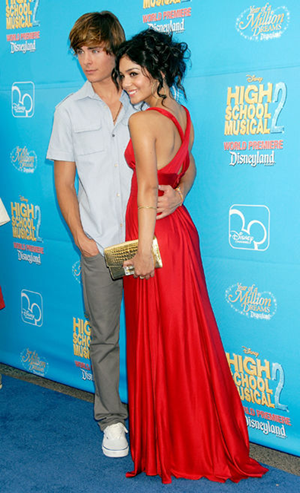 With High School Musical 3: Senior Year set to open on October 24, Zac Efron and Vanessa Hudgens are in the spotlight more than ever these days.

But constant attention from the press is nothing new to the couple known as Zanessa.

Remember when nude photos of Hudgens, meant solely for Efron’s eyes, were leaked to the public in September 2007? The controversy didn’t affect the pair. In fact:

“It’s only made them stronger,” a source told OK! magazine. “He’s getting better with compromising and loves to do little things, just to see Vanessa smile.”

Zac and Vanessa’s co-star, Ashley Tisdale, is equally enamored by her friends. She told the October issue of Seventeen:

“Vanessa and Zac are a great couple. They are as much in love offscreen as they are in HSM. There’s such a great chemistry that it’s like a fairy tale.”

While any future High School Musical movie is unlikely to star these two actors, we have a strong feeling that this won’t be the last we hear from them!