Getting ready for her new assignment on the Today show, Meredith Vieira shares her private side – from the crisis that made her marriage stronger to why her kids think she’s a mess. 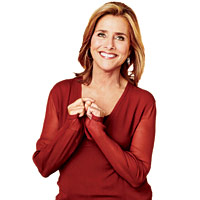 Though it’s a mild, sunny day, it would be entirely understandable if Meredith Vieira arrived for lunch in a snit. She’d planned to have a driver take her to the restaurant where we’re meeting,
inside New York City’s Central Park, but barricades blocked the roads. So the soon-to-be co-anchor of the Today show, succeeding Katie Couric as the woman who wakes up America, has been
forced to hike a quarter mile along the park’s looping, confusing paths — in black stiletto heels.

But as she strolls into the restaurant, dressed in cream-colored slacks and a snug knit top, she is unshaken. “I walked here,” she says in that familiar throaty voice, her smile warm, her green
eyes direct. She sounds calm, even amused by her little misadventure.

Vieira lacks even the accessories of celebrity — no sunglasses, no BlackBerry. She does not even carry a purse. She holds only a cell phone, which she politely keeps turned off for the next
two hours while she talks about the work she loves and the rich, challenging family life she loves even more. Vieira has had nine years of exposure on The View, the wildly successful ABC
morning chat show she moderated until last May. She’s also spent four years hosting the syndicated version of Who Wants to Be a Millionaire. And, as any fan of The View knows, she
has three children and a husband of 20 years, television producer and writer Richard Cohen, whose health problems have been openly discussed by Vieira in the past.

Vieira will turn 53 in December, and she has the laugh lines and creases to prove it (she has said she’d like to avoid plastic surgery for now). Today she is wearing thick television pancake
makeup, but only because she hasn’t had a chance to scrub it off yet. Sometimes she forgets and finds herself at her suburban supermarket, looking, she jokes, “like a washed-up prostitute.” This is
pure Vieira and a large part of her huge appeal: She’s a mix of stunning and soulful, a beauty with a big mouth and a warm heart.

Settling in at the table, Vieira instantly reveals herself as a woman who is not in the habit of lunching out. “What’s in a Cobb salad?” she asks of the entrée that appears, it seems, on the
lunch menu of every New York City restaurant. Told its ingredients — chicken, blue cheese, and bacon, among others — she orders one. (Later, a fellow patron will use the salad as an
excuse to approach Vieira, asking her about its contents. Vieira patiently describes the salad in detail and clearly makes the diner’s day.)