Who’s the biggest name in Hollywood right now? Whether it’s her three Emmy wins for 30 Rock or her spot-on Palin impression, there’s no doubt about it: Tina Fey is the “it” girl of tinsel town. Her career is simply sizzling! 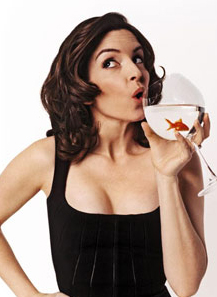 Her Sarah Palin impressions are a can’t miss and as SheKnows promised, we’ve got this week’s skit featuring Queen Latifah.

But Fey’s latest news is that she’s finalized a book deal with Little, Brown & Co. which means she’ll write a collection of non-fiction humor.

Think Nora Ephron-esque type entries. Apparently the deal went into a bidding war which only means one things: big bucks to the tune of six million!

Nice work. We’ll have what she’s having.

Here it is another Monday morning and the topic of conversation from the weekend is Fey’s turn as Palin on SNL yet again. This time out, the recruited Queen Latifah and brought in a fantastic Joe Biden character and the Vice Presidential debate was ripe for satire.

Don’t miss Saturday Night Live through the election, Fey has agreed to appear on each episode!