When Anne Hathaway received the Rachel Getting Married script, the project could have been anything. Working with director Jonathan Demme was an opportunity of a lifetime. 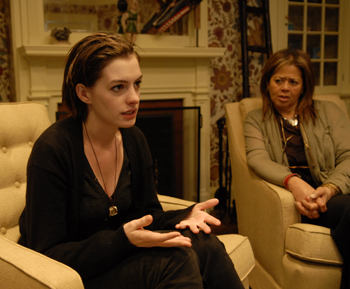 With the buzz Hathaway is generating for her performance as a recovering drug addict going to her sister’s wedding in Rachel Getting Married, do not be surprised if she’s one of the Fab Five nominated come Oscar time.

“Of course I found out Jonathan Demme was directing it and that sort of made me hit the roof!” Hathaway exclaims. Rachel Getting Married is written by Jenny Lumet and Hathaway says that the story she crafted allowed the actress to portray a character truly free with her words and actions.
“I love Kym’s almost compulsive need for honesty and how direct she is. Her timing may not be appropriate, but she’s trying so hard to get across the chasm of tragedy that separates her from her family,” Hathaway says. “She’s trying every day to choose joy and sobriety. She’s fighting for her place in the family. Trying to acknowledge and atone in her own way. At the end, maybe her sister Rachel understands her journey and that acceptance is crucial.”

Hathaway truly shot to stardom holding her own opposite Oscar queen Meryl Streep in The Devil Wears Prada.

Prior to being a critic darling, she climbed the silver screen ladder and achieved the almost-impossible in Hollywood: Getting audiences to take you seriously beyond a stereotype you portrayed more than once. 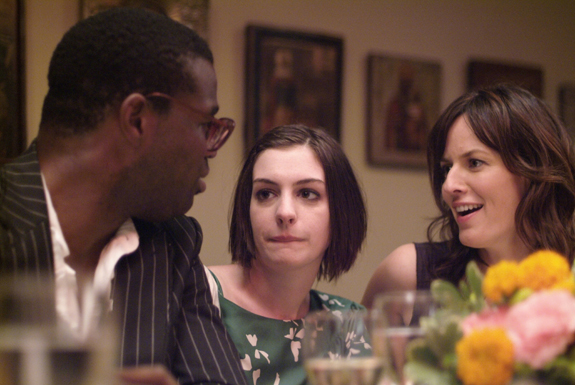 After the Princess Diaries movies and Ella Enchanted, most actresses would be sporting a tiara for the next three decades, but not Hathaway. When she tore up the screen as legendary British author Jane Austen in Becoming Jane, Hathaway had arrived.

If the English press adores you portraying an icon in their culture, the tiara was officially removed from Hathaway’s head as she shot to serious actress. 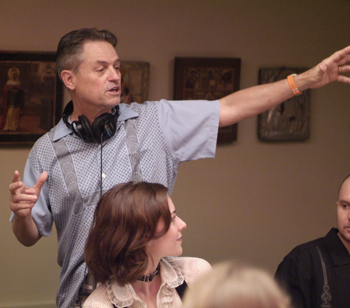 In Rachel Getting Married, her character, Kym, is a flood of emotions tending towards the anger side of the spectrum as she comes to grip with her drug addiction and a family event with the cloud of her past hanging over it.

“Kym comes home and is trying to communication. She tries to communicate and the family is trying to love her in any way they can. It’s about how those two things that are very far apart come together to a certain understanding,” Hathaway says. “I loved the way it sounded the way a family talks.”

Some of the filming techniques Demme employs, Hathaway reports, is evidence of her director’s passion for the spontaneous.

“The post rehearsal dinner scene when the family’s all together, they start out in the kitchen, go into the dining room, then the hallway, into the living room and back into the kitchen. That was all one shot.”

For the thespian that is knocking audiences out with her performances of late found the Rachel Getting Married experience more stage than screen. “This one felt like theater. You had to listen ever second. Distraction was not an option,” she says.

One unusual feat that was uniquely ‘Demme-ian’ was the performance of the actors while the music was played and recorded for the soundtrack.

“To know that the movie was being scored live, made me very, very excited and was beautiful to have in the scene,” Hathaway says. 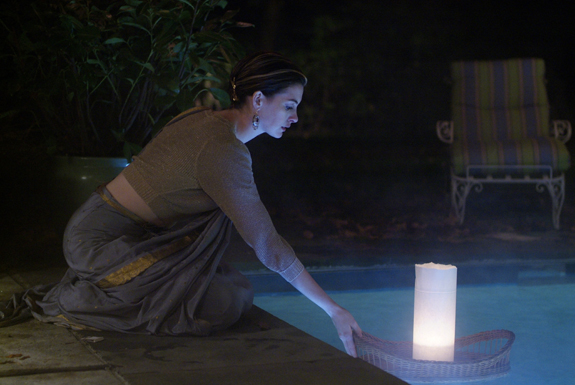 For the auteur who created Philadelphia and The Manchurian Candidate’s successful remake, having Hathaway’s own spontaneity proved priceless for the filmmaker, albeit stressful for the performer.

“There’s one scene where Rosemary has a very intense monologue with Kym,” Hathaway says. “We did the first take and I couldn’t hear her.”

Demme had a second camera crew filming the musicians playing outside on the porch, just beyond the Hathaway scene.

What did Hathaway do?

She yelled ‘Do they have to play all afternoon?’ Demme captured the moment and the shot and the shout ended up in the film. “I love that that happened,” Demme adds.

Those moments and dozens more added up to a treasured creative experience for Hathaway. “Working with Jonathan has been an amazing experience. Intuitively we were always moving in the same direction,” Hathaway said.

“It’s experiences like this that made me want to be an actor. So I’ve been very lucky to be here.” 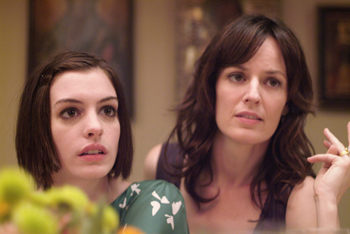 Hathaway would return to a Demme set without thought.

“There was such an atmosphere of trust. Since we never knew when the camera was on us, the cast had to listen every second and achieve a very intense level of focus, Hathaway says.

“One of the lessons that the movie teaches, particularly for people in recovery, is how important it is to stay in the present. To be able to stay in character, and hear and react to the music and the scene around you, is very liberating for an actor.”

“To me, this is a story about communication and love,” she continues, “and we were given the latitude to explore that.”

Richard Gere and Diane Lane: The Nights in Rodanthe interview
Don’t miss our video interviews with the cast of The Women
The SheKnows fall film preview
The Top Ten back to school films
John Cusack and the cast of Igor get evil with SheKnows