Singer Clay Aiken is finally confirming what the saner of us already knew: he is gay. 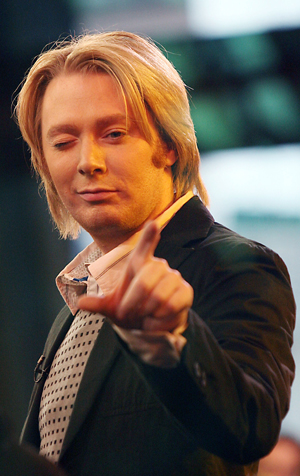 Aiken will be featured on the cover of this week’s People holding his infant son, Parker, with the headline, “Yes, I’m gay.”

Why did the singer choose now to come out of the closet?

He says fatherhood changed everything. “I cannot raise a child to lie or hide things,” he states in a cover quote.

Aiken rose to fame as runner up in the 2003 cycle of American Idol, losing to Ruben Studdard. Despite rampant rumors about his sexuality, including cybersex partners who released web cam pics of the singer, Aiken steadfastly refused to discuss his sexuality.

“I don’t really feel like I have anybody to answer to but myself and God and the people I love,” he told the Associated Press in 2006.

The multi-platinum artist recently released a new album, On My Way Here, and debuted on Broadway last spring in Monty Python’s Spamalot.