Former Blink 182 drummer Travis Barker and DJ AM were the only survivors of a fiery small plane crash late at night on Friday, September 19, 2008. 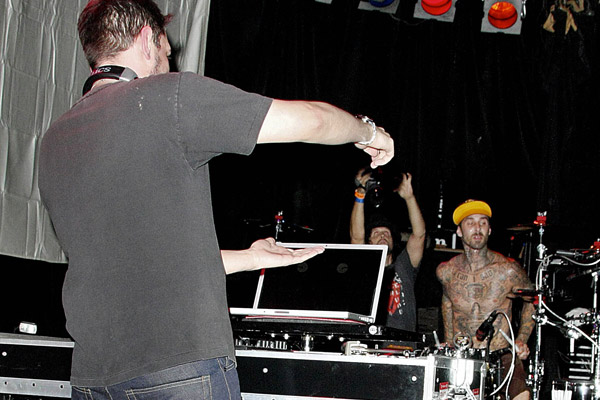 The two men, who perform together as TRVSDJ-AM, were as critically injured — and reportedly both have extensive burns. Travis Barker is said to have burns from the waist down, while DJ AM (aka Adam Goldstein) has burns to his face and head. 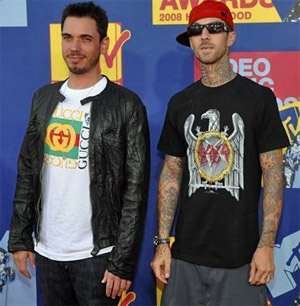 Their Learjet crashed Columbia Metropolitan Airport in South Carolina after a failed takeoff attempt at 11:53 pm Friday, September 19, as the musicians were en route to California.

The FAA says that after the plane sent up sparks, it went off a runway, through a fence, across a road and crashed into an embankment. Barker and Goldstein were the only two who escaped the wreckage.

The two men had performed earlier that night at a free outdoor concert, along with Perry Farrell (founder of Lollapalooza and formerly of Jane’s Addiction) and as singer Gavin DeGraw.

Adam Goldstein/DJ AM, 35, is likely the more injured of the two, as he was airlifted to the Joseph M Still Burn Center in Augusta, Georgia, from a hospital in Columbia, South Carolina. Travis Barker, 32, was driven by ambulance to the same burn center — roughly 70 miles from Columbia. Hospital spokesperson Beth Frits said on Saturday morning, “They’re both listed in critical but stable condition.” 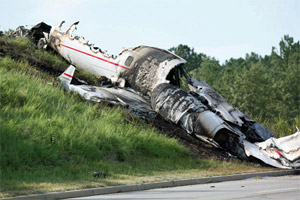 Of those who died, two were passengers and two crew, and none of them ever escaped the jet. Perry Farrell’s manager confirmed that his client was not on the plane and Gavin DeGraw’s father, Wayne, told MTV News that his son was fine. One passenger who was killed was Travis Barker’s assistant, Chris “Little Chris” Baker, 26, whose wife is reportedly expecting.

A witness driving nearby told CNN affiliate WIS-TV that he tried to get to the wreckage “to the two guys that seemed to have been dumped on the highway.” The two men were on fire, and the witness said that they were pulling off their clothes patting each other down in an effort to put out the flames.

This story was first posted at 7:31am PST.